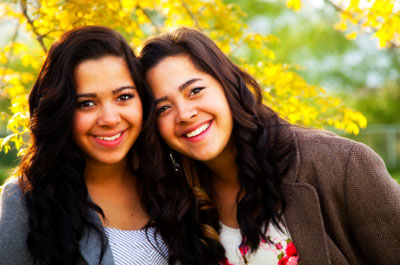 Twin peaks: Identical twins who are discordant for autism show intriguing differences in DNA methylation, a type of epigenetic mark.

Twin peaks: Identical twins who are discordant for autism show intriguing differences in DNA methylation, a type of epigenetic mark.

Epigenetics, or the chemical markings on DNA that affect its expression, plays a role in some cases of autism, according to a new study of 50 identical twins published 23 April in Molecular Psychiatry1.

Autism has strong genetic roots: If one identical twin has autism, the likelihood that the other also has the disorder is about 70 percent2. But the other 30 percent of the time, the twins are discordant, meaning that one has autism and the other does not.

The new study finds many differences in DNA methylation between twins discordant for autism. Methylation is a type of epigenetic change in which methyl groups are added to DNA and switch on or off the underlying gene. The researchers also found methylation differences between twins who differ on tests of autism traits.

Epigenetic marks can be influenced by any number of environmental exposures, from everyday behaviors to diet and stress. Studying identical twins, who share the same genetic material, helps researchers zero in on environmental differences, says Robert Plomin, professor of behavioral genetics at King’s College London in the U.K., who co-led the study. “It’s a neat tool for getting at environmental factors that could be causing autism,” Plomin says.

Some of the epigenetic marks crop up in genes that have not been linked to autism before, whereas others implicate known autism candidates, such as AUTS2, GABRB3, NLGN3, NRXN1, SLC6A4 and UBE3A.

“When the same loci show up again and again, it probably means that they’re relevant for disease,” says Schahram Akbarian, professor of psychiatry and neuroscience at Mount Sinai School of Medicine in New York, who was not involved in the new study. Akbarian’s team has also implicated AUTS2 in epigenetic screens of postmortem brain tissue from individuals with autism. “Both our study and the new study propose that the epigenetic risk architecture of autism shows significant overlap with the genetic risk architecture of the disorder.”

Plomin and his collaborators mapped the epigenetic profiles of 50 pairs of identical twins, a subset of a much larger project in the U.K. called the Twins Early Development Study.

Participants in the project were all born between 1994 and 1996. When they were 8 years old, they took the Childhood Autism Symptom Test, or CAST, a 31-item questionnaire that measures autism traits such as speech delay and difficulty making conversation. The researchers collected blood samples from the participants at age 15.

Of the 50 twin pairs, 6 are considered discordant for autism. “These are the twins in our study who differed as much as possible in their autistic symptoms,” Plomin says.

Each of these six twin pairs shows dramatic differences in DNA methylation, the study found. On average, each pair has 37 genomic regions with significant methylation differences. Most of these are unique to that pair, but a few genes are methylated differently in at least two of the twin pairs.

Like most twin studies, this one is limited by its small numbers, notes Janine LaSalle, professor of medical microbiology and immunology at the University of California, Davis, who was not involved in the study. “Some of what they’re seeing could be noise that won’t hold up in larger studies,” LaSalle says. “But I think it’s encouraging that they’re finding some interesting differences.”

The study also found methylation differences between twin pairs discordant for certain autism traits, based on subscales of CAST.

For example, in nine pairs discordant for social traits, one of the differentially methylated genes is GABRB3, which encodes a brain receptor linked to autism. In another eight pairs discordant for communicative behaviors, the researchers fingered UBE3A, mutations in which cause the autism-related Angelman syndrome.

This approach is well suited for trying to simplify the notorious variability of the autism spectrum, notes Valerie Hu, professor of biochemistry and molecular biology at George Washington University in Washington, D.C., who was not involved in the work.

“The heterogeneity of autism, both in terms of clinical presentation and in terms of genetics, wipes out a lot of significant findings,” she says. “By breaking down the [traits], they seem to have gotten out a lot more genes.”

In 2010, Hu’s group reported methylation differences in three twin pairs discordant for autism3. That analysis pinpointed two genes, RORA and BCL2, which did not show up in the new study. “That probably also speaks to the heterogeneity,” she says.

It would have been interesting to track how the differences affect gene expression, Hu adds. “It’s important in the long run to demonstrate that the methylation differences picked out here have functional relevance, because that’s where it’s at, right?”