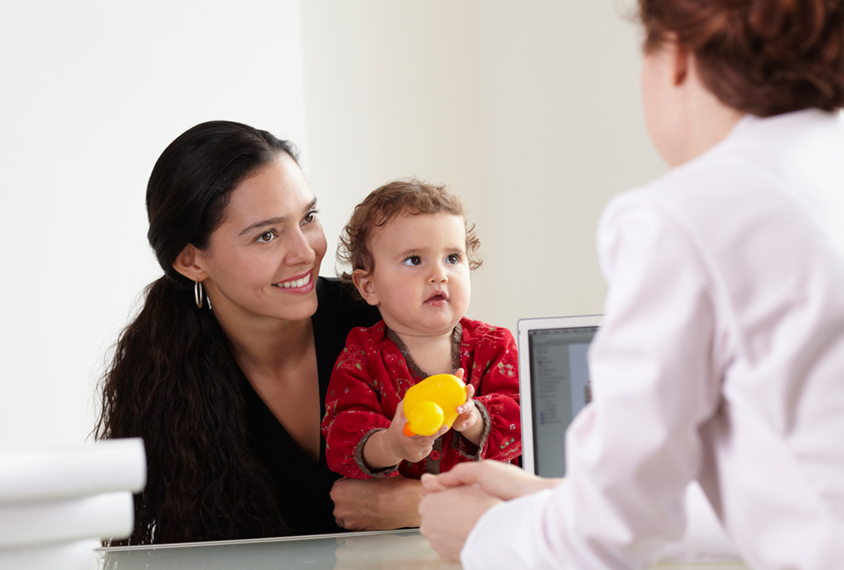 Screen time: Improving a clinic’s rate of autism screening might help children get diagnosed at an early age.

Pediatric clinics can boost their rates of autism screening and diagnostic referrals by way of sensitive tests, electronic notifications and secondary screens, according to a new study.

Clinicians are advised to screen toddlers for autism during regular check-ups at 18 and 24 months of age and to refer those who screen positive to a specialist for a diagnostic evaluation. But less than half of autistic children in the United States are screened for autism by age 3, some studies estimate — which leads to inequities in diagnosis, advocates say. And the standard screening tool, the Modified Checklist for Autism in Toddlers, Revised (M-CHAT-R), may fail to identify more than 60 percent of autistic children, who then miss out on early intervention.

The new study assessed how often autism screenings took place at two clinics at the University of Utah in Salt Lake City. About half of the children who visited the clinics from 2014 to 2017 had been screened, a figure in line with national estimates, the researchers found. But only 0.5 percent were eventually diagnosed with autism — about one-third the rate recorded at other sites, suggesting the clinics’ screening and referral practices were ineffective.

“We thought we might be delaying diagnosis by not being up to date with universal screenings,” says lead investigator Kathleen Campbell, a pediatric resident at the University of Utah.

Campbell and her colleagues designed a plan to increase screening over the course of a year. They tested a series of changes in the two university clinics, which are well equipped to adopt new training methods, and 27 community clinics, some of which are affiliated with the university.

The team launched their plan by having the university clinics switch from the M-CHAT to the Parent’s Observations of Social Interactions (POSI), which some studies show is more sensitive. They also modified the electronic health-record systems at the university clinics (and community clinics that opted in) to alert a pediatrician if a screening result suggested the child needed further evaluation.

Next, the team added notifications to the electronic health-record systems at all of the clinics to remind staff when a child was due for an autism screening. The systems already use reminders for vaccination schedules and other time-sensitive items, so the autism screening reminders fit easily into the clinics’ workflow, Campbell says.

To avoid a spate of false positives, which could clog the diagnostic assessment pipeline, Campbell and her colleagues added an option for clinicians at the university clinics to administer a secondary screen, the Screening Tool for Autism in Toddlers (STAT), before making a referral.

After a year, the university clinics had increased their screening rate from 58.6 percent to 88.8 percent — a change from 1,217 total screens in the previous year to 1,847 screens. They also referred children for diagnostic evaluation 3.4 times more often than before.

The community clinics made fewer changes but still raised their annual screening rate from 43.4 percent to 52.4 percent, or from 1,750 to 2,119 total screens. They did not, however, significantly increase their number of referrals. The results were published earlier this month in Pediatrics.

How the findings relate to rates of diagnosis remains unclear.

“[The results] show that there are ways that we can intervene to improve screening, and that there are ways we can intervene to improve rates of referral for further evaluation once there’s a positive screen,” says Sonia Monteiro, assistant professor of pediatrics at Baylor College of Medicine in Houston, Texas, who was not involved in the new work.

“But it doesn’t necessarily answer the question of whether or not improving screening really leads to an earlier age of diagnosis,” she says.

Campbell and her colleagues plan to address that question once they have data on the number of referred children in the current study who eventually get an autism diagnosis.

Another limitation of the work is that some elements, such as changing from the M-CHAT-R to the POSI or adding in the secondary STAT screening, may not be feasible at all clinics, especially under-resourced ones.

“The screening can only get you partway down the road,” says Diana Robins, director of the the A.J. Drexel Autism Institute in Philadelphia, Pennsylvania, who was not involved in the study. Getting more children correctly diagnosed will require providers and parents acting on those positive screen results, she says.

But because other measures tested in the study, such as adding electronic notifications, could feasibly be done at any clinic that uses an electronic health system, “that is something that everybody should be doing” to increase screening rates, she says.