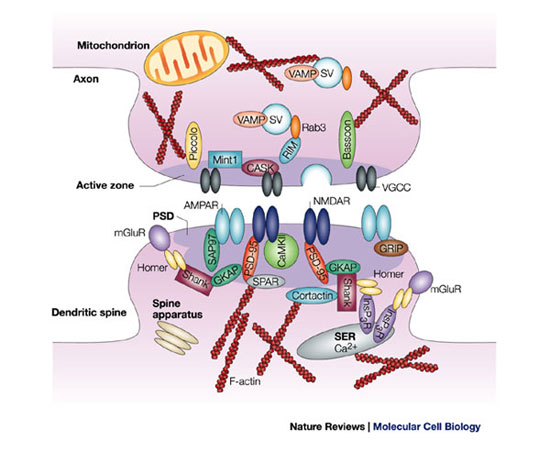 Just right: Some autism-related disorders are characterized by too many proteins at the synapse, others by too few.

Autism is a diverse condition with few robust molecular explanations. But a study of mice with tuberous sclerosis (TSC) — a single-gene disorder that is related to autism — suggests that most forms of autism share a common feature: an imbalance of proteins at the synapse, the junction between neurons. The work was presented at a poster session Monday at the Society for Neuroscience annual meeting in San Diego.

Many genetic disorders that include autism symptoms — such as fragile X syndrome, PTEN deletions, Rett syndrome and TSC — stem from glitches in a pathway called mTOR, which regulates the formation of synaptic proteins.

Mark Bear‘s team at the Massachusetts Institute of Technology has famously shown that mouse models of fragile X syndrome make too many synaptic proteins, and that this abnormality can be reversed with a targeted drug.

In the new study, Bear’s group looked at mice missing TSC2, one of two genes that cause TSC. In slices of hippocampus, a region important for learning and memory, the researchers induced a dramatic drop in voltage called ‘long-term depression.’ Because this process requires rapid turnover of proteins, it serves as an indirect measure of protein synthesis.

The loss of TSC2 causes benign tumors and has been linked to an overgrowth of axons. So the researchers expected to find that the mice would have excessive protein synthesis — but they found exactly the opposite: the TSC mutant mice make too few synaptic proteins.

“It appears that TSC and fragile X are mirror images of each other,” says Benjamin Auerbach, a graduate student in Bear’s lab.

Healthy brains may require a ‘Goldilocks’ level of proteins at the synapse: some autism-related disorders make too few, whereas others make too many. Unless the balance is just right, autism and other cognitive problems can occur.

The findings have “very important implications” for treating these conditions, Auerbach says. “Drugs that work in fragile X will not only probably not work in TSC patients, but they may make them worse by pushing them farther out of this optimal range.”

Bear’s group also showed that giving the mutants rapamycin, a cancer drug, reverses the deficit. This was expected, as both rapamycin and TSC2 inhibit the mTOR protein.

Animal studies have shown that rapamycin reduces tumor growth in TSC mutants, and early clinical trials are investigating whether the drug helps people with the disease. But rapamycin has harsh side effects: it suppresses the immune system and can cause gastrointestinal problems and mouth ulcers.

Intriguingly, the researchers found that the deficits in TSC mutant mice can be reversed with a new drug that has none of these side effects: mGluR5 PAM, which induces protein synthesis by enhancing activity of mGluR5 receptors.

“We think this mGluR5 PAM could be a viable alternative to rapamycin,” Auerbach says. Still, because the drug has not yet been tested in the clinic, “it will be a long road” to testing it in people with the disorder.