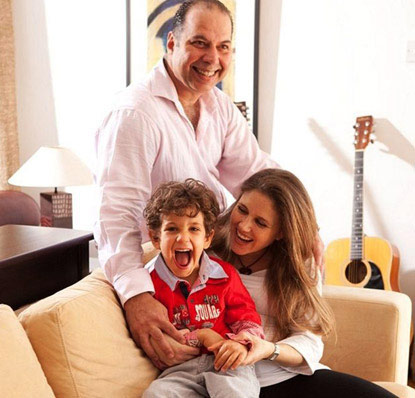 Gus Alusi, a British surgeon and cancer researcher, has spent the past couple of years trying out different treatments for his son Kenz, who has fragile X syndrome, one of the most common forms of inherited intellectual disability.

Alusi, his wife Reem, and a team of therapists have tried a number of different drug treatments, such as antidepressants and antipsychotics, hoping to dampen some of the anxiety that goes along with the disorder.

Alusi videotaped his son’s progress along the way. In early shots, Kenz (pictured at left with his parents) is clearly agitated, whimpering and whining in distress as his mother or therapists try to help him put on clothes and shoes. But in videos taken a year later, he is much calmer. He still has occasional outbursts, but seems better able to pacify himself.

Alusi, who along with his wife has launched a nonprofit advocacy group, Cure4x.org, ascribes the change to the drugs, but also to an intensive regimen of behavioral therapy. The experience has convinced him that medication and behavioral therapy must go hand in hand.

“Behavioral therapy alone is like readinga book in the dark, and medications are like the light,” Alusi said. “You need both to get the full benefit.” (Alusi declined to give the name of the drug that he thinks has most helped his son, saying only that it is approved for pediatric use.)

This approach is not new to psychiatry. Large-scale studies have shown that combining antidepressants with cognitive behavioral therapy is more effective than either treatment alone. People with moderate to severe forms of depression are typically given both.

But this is a tall order for a field that is struggling to develop its first successful drug. No medicines are available to treat the core symptoms of fragile X, though children with the disorder are often treated with drugs approved to alleviate secondary symptoms, such as anxiety, attention deficits and aggression.

Parents, physicians and scientists are anxiously awaiting the results of ongoing clinical trials for a class of drugs, known as mGluR5 antagonists, that have been highly successful in treating animal models of the disorder.

“It’s a waste of time to put my son through clinical trials that last two weeks, which isn’t long enough to see a change in cognition,” he said. “As a parent, I can see you need months of treatment, along with some form of education and stimulation, to produce a tangible benefit beyond simple calming down.”

Randall Carpenter, president of Seaside Therapeutics, which is testing two drugs for fragile X and autism, agrees that this combination is critically important, and something they aim to implement at Seaside. “Even if you normalize brain plasticity and the ability to learn,” he says, “children need training, especially if they are trying make up for lost time.”