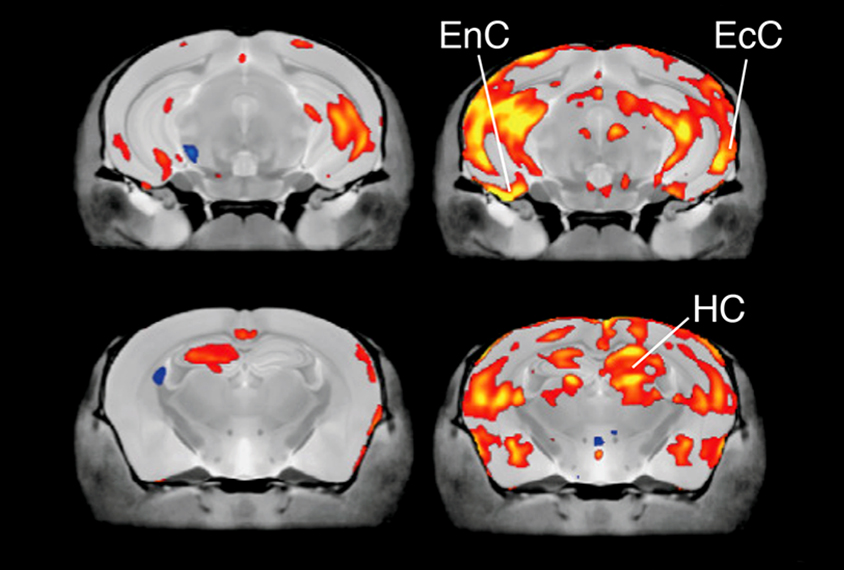 Dose effects: The brains of mice producing only 35 percent of the typical levels of CHD8 protein (right) grow larger in several cortical areas, compared with those producing 50 percent (left).

Mutations that strongly curb the expression of CHD8, a top autism-linked gene, block the proliferation of developing neurons and stymie brain growth in mice, two new studies show. By contrast, mutations that only mildly dampen the gene’s expression increase proliferation and lead to brain overgrowth, according to one of the studies.

The new work suggests that CHD8 wields its effects on brain size by controlling the proliferation of intermediate progenitor cells, says Albert Basson, professor of developmental neurobiology at King’s College London in the United Kingdom, who led one of the studies. These cells give rise to neurons in the cortex.

People with a missing or mutated copy of CHD8 often have autism, intellectual disability and an atypically large head. But the reason for this third trait has been unclear. Mice and people with one functional copy of the gene both have about half the typical amount of CHD8 protein, but the mice generally show a smaller increase in brain size than people do.

The new studies hint at how both overgrowth and undergrowth can result from mutations in CHD8, depending on how much protein is present and which brain cells are affected.

“These two results are basically telling the same thing: CHD8 is a strong promoter of brain growth,” says Eunjoon Kim, director of the Center for Synaptic Brain Dysfunctions at the Korea Advanced Institute of Science and Technology in Daejeon, South Korea, who co-led one of the new studies.

The former have unusually large brains, similar to what’s seen in people with CHD8 mutations. The latter, on the other hand, have smaller-than-average brains.

This difference arises because CHD8 controls the expression of thousands of other genes — some of which have different sensitivities to CHD8’s loss, Basson says. In particular, CHD8 suppresses genes controlled by p53, a tumor-suppressing protein that helps keep cell division in check.

An analysis of gene expression levels revealed that CHD8 protein can still perform some of its critical functions in mice that produce 35 percent of the typical levels — including, Basson notes, repressing p53 target genes. However, many autism-associated and neurodevelopmental genes are downregulated in these mice.

In the mice producing 10 percent of typical protein levels, genes regulated by p53 were dominant, driving neural progenitors to mature prematurely or die, resulting in a smaller-than-usual brain.

“Given the importance of these progenitors in expansion of the human cortex, we suggest that [missing one copy of] CHD8 might have more pronounced effects on fetal brain development in humans, compared [with] mice,” Basson says. The work appeared in February in Molecular Autism.

Other researchers should bear in mind the divergent effects of CHD8 loss, Basson says. It could help to explain why different sets of CHD8 mice have sometimes yielded conflicting results.

“This uneven trajectory of CHD8 function always required some explanation, and it seems that p53 may be part of that explanation,” says Konstantinos Zarbalis, associate professor of pathology and laboratory medicine at the University of California, Davis, who was not involved in the work.

Although researchers showed that CHD8 suppresses p53 function in mice more than a decade ago, “this paper elegantly provided support for this,” he says.

In the other study, Kim’s team created mice that lack both copies of CHD8 only in their excitatory neurons. These mice almost completely failed to grow cortical brain structures, according to findings published in February in Cell Reports.

The reason, as in Basson’s study, may be cell death, accelerated in the absence of CHD8.

The mice in Kim’s lab did not show autism-like behaviors once they reached adulthood — in fact, they showed increased social behavior.

“We were intrigued because cortical areas are known to critically regulate social interaction,” Kim says. “It almost seems that the loss of cortical areas induces this increase.”

Social difficulties associated with CHD8 loss may be rooted in cell types beyond the ones he and his team studied, he says.

The reduced brain size in the mice is also at odds with findings in people with CHD8 mutations. The brain enlargement in people may result from changes in cells other than excitatory neurons, Kim says, or be an indirect consequence of the gene’s loss — something the brain does to compensate for the absence of CHD8.