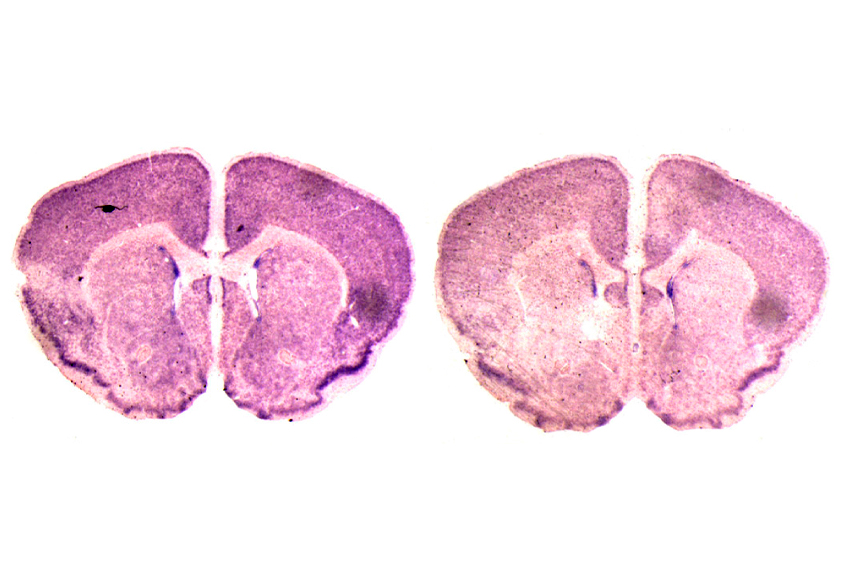 In a bind: Mice that lack the autism-linked gene POGZ have altered expression of ADNP, which is also implicated in autism.

The autism-linked gene POGZ facilitates the accessibility and expression of genes involved in wiring up the brain in utero, according to a new mouse study.

People with a mutation in POGZ are more likely than those without to have autism and intellectual disability. The POGZ protein binds to DNA and is thought to either promote or repress gene expression, but its exact function is unclear.

The new work identifies genes that are expressed differently in embryonic mice that lack POGZ, and it points researchers toward potentially autism-relevant pathways, says lead researcher John Rubenstein, professor of psychiatry at the University of California, San Francisco.

The results failed to replicate two 2020 studies that had found that POGZ regulates the production of new neurons in mice. But the gene could have multiple functions that change throughout development, says Sagiv Shifman, professor of genetics at the Hebrew University of Jerusalem in Israel, who led one of the previous studies but was not involved in the new work.

Each study provides a snapshot of the gene’s role and captures only a small portion — like trying to cobble together the proverbial image of an elephant after seeing only its tail or ear, Shifman says. “The system is very, very complex.”

POGZ knockout mice die shortly before birth. But at embryonic day 13.5, the number of new neurons in the cortex is similar to that of wildtype mice, Rubenstein and his colleagues found.

The researchers used a technique called ‘cut and run’ to identify 2,023 sites where the POGZ protein binds in the genome of wildtype embryonic mice. Of those sites, 92 percent were in regions with accessible chromatin, and a disproportionate number overlapped with enhancers — strips of DNA that, when bound by a protein, encourage gene expression. Many genes near POGZ binding sites enhance chromatin accessibility and axon growth, the analysis showed.

POGZ knockout mouse embryos had lowered expression of genes related to synapse formation and axon growth, the team found. Many of the most affected genes, including the SLITRK5 family of genes, which are linked to Tourette syndrome and obsessive-compulsive disorder, cluster together in the genome in accessible regions of chromatin. Without POGZ, the chromatin surrounding these genes became more tightly packed, rendering the genes less accessible, the study shows.

“It seems that POGZ has a very specific role in promoting the active chromatin state and transcription of a select set of genes in the genome,” says study investigator Eirene Markenscoff-Papadimitriou, associate specialist in Rubenstein’s lab.

The knockout embryos also had higher expression of the gene SLC6A1, which is strongly linked to autism and codes for a protein that transports the inhibitory neurotransmitter gamma-aminobutyric acid (GABA) away from synapses after it is released.

POGZ seems to function similarly in the human brain: The protein binds to regions of DNA near the SLITRK family of genes and other autism-linked genes, according to ‘cut and run’ data from the human fetal cortex. The work was published in Cell Reports in December.

In both human and mouse tissue, the researchers found, about half of POGZ’s binding sites also bind to ADNP — another autism-linked protein — and HP1, which helps shape chromatin structure.

“POGZ and ADNP seem to work together to in turn regulate the expression of other genes involved in neurodevelopment,” says Wendy Chung, professor of pediatrics and medicine at Columbia University, who was not involved in the work. (Chung is also director of clinical research at the Simons Foundation Autism Research Initiative, which, like Spectrum, is funded by the Simons Foundation.)

Rubenstein and his colleagues suggest that POGZ and ADNP form a complex to do so. But those results are preliminary, Shifman cautions. “We still need to understand exactly how the connection between POGZ and ADNP works.”

And even though the new study helps explain POGZ’s role in neurodevelopment, it is also unclear how POGZ alters gene accessibility in autistic people who lack one functional copy of the gene. Rubenstein and his colleagues plan to investigate this next.

“It will be important to know if the mechanism is the same,” Chung says, to identify the ongoing role of POGZ in the human brain post-development and what kind of treatment is possible.