A new wireless device activates a mouse’s neurons as it navigates a cage with food, hiding places and other mice, allowing researchers to study social behavior in a realistic environment1. Experiments using this setup suggest that oxytocin has distinct effects in different contexts — which may be particularly important as researchers explore the hormone’s value as a potential treatment for autism.

The device makes use of optogenetics, a technique in which researchers use pulses of light to activate or silence neurons. Autism researchers have used the approach to manipulate neural circuits in mice, but traditional optogenetic devices involve a fiber-optic cable, which tethers the animal and interferes with social interactions.

Other wireless devices have been able to activate neurons without a tether, but researchers have mostly used them to study social behavior involving just two mice interacting for only about 15 minutes in an otherwise empty cage — a scenario that fails to capture a full range of mouse behaviors2.

The new wireless device, powered by two watch batteries, consists of a light-emitting diode attached to an optical fiber that is implanted into the brain. It has an on-off switch that allows researchers to control it remotely using a magnet placed inside the cage.

Using this setup, researchers can modulate brain activity in a group of mice as they roam for days through a cage that has hiding places, platforms, a nest, food and water. 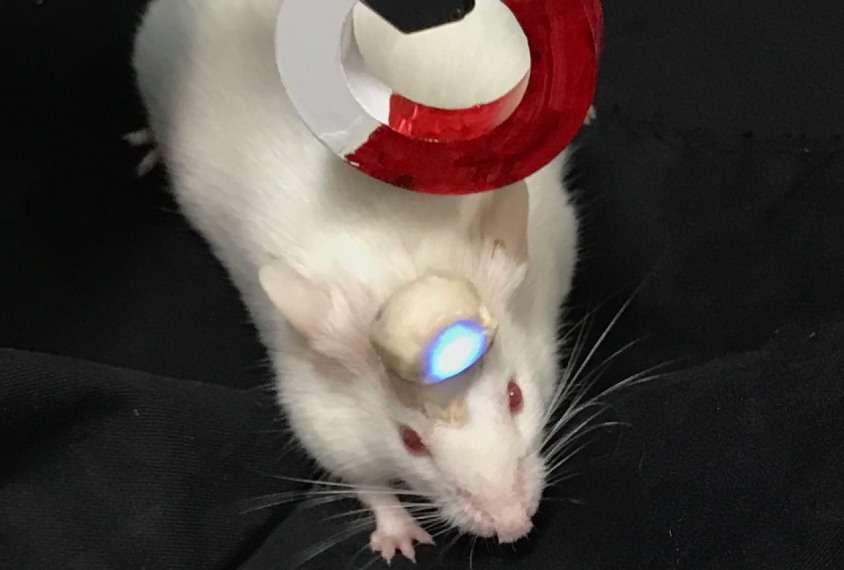 Remote control: Scientists can turn the new device on and off using a magnet, allowing them to study mice as they move freely.

The device’s designers tested it in mice engineered to express light-sensitive proteins in part of the hypothalamus. This region produces the hormone oxytocin, generally thought to reduce aggression and enhance social bonds. When delivered as a nasal spray, it improves social skills in some people with autism.

In one test, the team placed a male mouse in the cage with a female mouse for six days, giving the male time to establish its territory. On day seven, the researchers removed the female and activated the device in the male, delivering several pulses of light to stimulate oxytocin production. The team then introduced an unfamiliar male mouse into the cage and observed the first mouse’s behavior.

As expected, mice stimulated to produce more oxytocin were less aggressive toward the intruder than controls were, the researchers report in June in Neuron. These mice also spent more time self-grooming, on average, which is consistent with previous research.

In another test, however, oxytocin appeared to have the opposite effect. The researchers outfitted four male mice with devices and let them mingle for four days. The team then delivered five pulses of light over two consecutive days to all four mice and assessed changes in behavior. They ran the same test with four controls.

On the first day, the mice with activated oxytocin-producing neurons showed a greater increase in social behaviors than control mice: They were more likely to be in close proximity to other mice and spent less time alone, outside of the nest. On the second day, however, the same mice became more aggressive than controls did, chasing other mice more often.

The new device could help researchers better understand oxytocin’s varied effects. It could also be used study other behaviors in complex group-based environments.