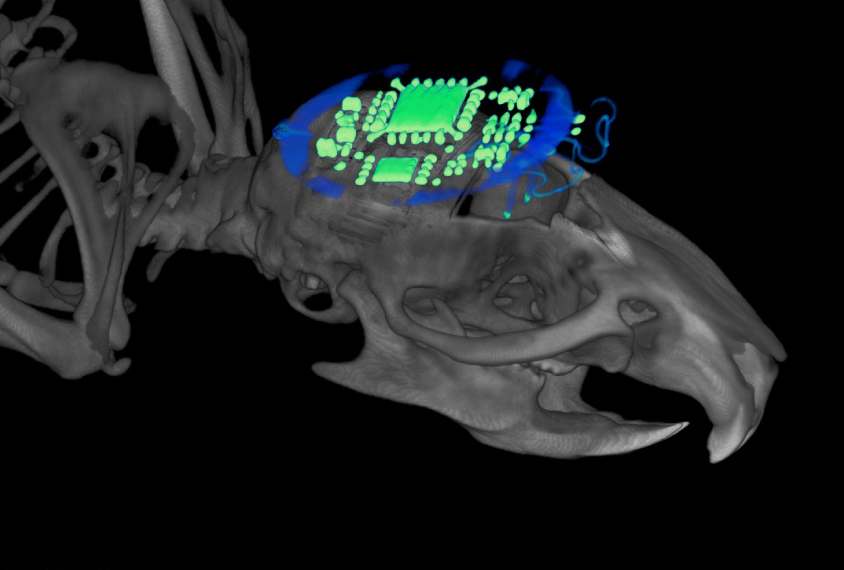 Tiny device: A new optogenetic device can be implanted entirely beneath a mouse's skin and controlled wirelessly, enabling animals to move freely during experiments.

The devices, described in Nature Neuroscience in May, make use of optogenetics, a technique in which pulses of light activate or silence neurons engineered to express light-sensitive proteins called opsins. The same technique has been used to study the hormone oxytocin’s role in social behaviors relevant to autism.

Traditional optogenetic devices rely on power from cables that can limit both the speed and distance of animals’ movements, making it difficult to study the link between neuronal activity and social behaviors.

Researchers have developed wireless, battery-powered optogenetic devices that can be mounted on an animal’s head, but these apparatuses are often bulky and distracting to the animals. “Mice tend to gnaw on the head-mounted devices, so we wanted fully subdermal implants,” says John Rogers, director of the Querrey Simpson Institute for Bioelectronics at Northwestern University in Evanston, Illinois.

Rogers and his colleagues created a thin device, about 1.2 millimeters thick, that they can mount beneath the skin on a mouse’s head. It has two micro-LED lights affixed to the ends of sharp probes that can be injected into the skull and controlled independently.

The team also made a larger, more powerful device that can be mounted on an animal’s back; it has four micro-LEDs on the tips of metal coils that extend up the neck and into the skull. The larger device can stretch and bend to accommodate the wide range of a mouse’s movements.

Both devices are powered wirelessly and can be controlled from a nearby computer in real time, enabling researchers to modulate each light’s optical intensity, pulse duration and frequency in up to 256 animals at once without impeding their movement.
Youtube Full width:

In a series of experiments, the researchers implanted the back-mounted devices on mice and then monitored their movements as they explored a rectangular cage. The wireless devices did not reduce the animals’ activity or speed compared with mice that had no device, whereas mice with a cable-powered optogenetic device were sluggish and moved less.

The devices remained functional in the mice for more than nine weeks without damaging brain tissue, the study shows. And similar implants from the team have remained functional for even longer, without causing any noticeable harm, Rogers says. “We’ve had animals that have had these devices basically their whole lives, for 2 years or more, until they die of natural causes.”

The team then tested the devices in mice engineered to express an opsin protein in dopamine neurons in the ventral tegmental area, a brain region involved in reward processing and social behaviors. They placed a mouse with the optogenetic device into a cage with a toy and another mouse of the same sex. Stimulating the dopamine neurons nearly doubled the amount of time mice spent interacting with the other animal but did not change the amount spent near the toy, suggesting the device had successfully targeted the social-reward circuitry.

Brain activity becomes synchronized between people during social interactions, according to previous research. This interbrain synchrony can increase social bonding and may be impaired in people with autism, although research exploring this issue has produced mixed results.

The devices can be used to perform even larger, population-based behavioral studies on hundreds of animals at once over long time periods, Rogers says. And they could help provide insight into the mechanisms that underlie atypical social behaviors, Rogers and his colleagues say.