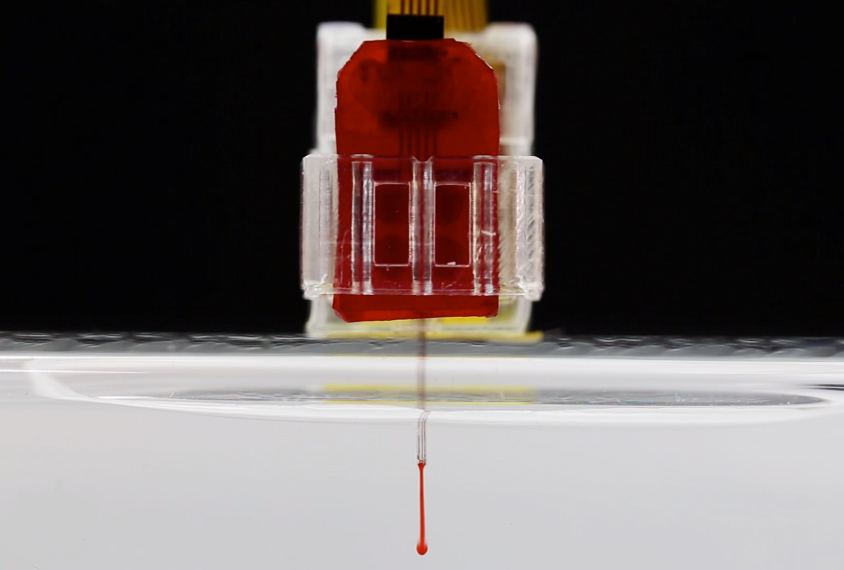 A novel implant can deliver complex combinations of drugs and light to targeted areas of a lab animal’s brain, without restricting the animal’s movement1.

The tool could help researchers uncover the brain pathways that underlie repetitive behaviors and unusual vocalizations in mouse models of autism. It could also help them test treatments for the condition.

Conventional drug delivery to a lab animal relies on a pumping system connected to a metal tube, or cannula, that is implanted directly in the animal’s brain. This setup is not ideal for studying behavior, however, because the animal must be tethered to the pumping station, which can elevate its stress. Also, the cannula damages brain tissue.

By contrast, the new device is mounted on top of an animal’s head, enabling the animal to move freely. The device’s ultrathin, soft probe creates a lesion in the animal’s brain of only 0.04 square millimeters, a third of the size of the opening a cannula requires. And whereas traditional wireless systems are limited to a maximum of four drug deliveries, the new device contains a replaceable cartridge that allows for unlimited drug infusions.

A smartphone app connected to the system via Bluetooth technology controls the release of up to four drugs at a time. The app can also activate two light-emitting diodes in the device to stimulate neurons that researchers can modify to respond to various wavelengths. This latter approach, called optogenetics, activates different neural pathways from the ones drugs do, so by combining optogenetics with pharmacology, the device opens up a range of experiments.

Using different Bluetooth signals, researchers can target individual mice within a group from 10 to 100 meters away, from any angle and even through closed doors. Because they can activate the device from outside the experiment room, they can further minimize the animals’ stress. The researchers described the invention in August in Nature Biomedical Engineering.

Implanting the device requires one surgery, and the tool is precise enough to target neural circuits anywhere in the mouse brain. The researchers tested the system for four weeks but expect that it would remain functional for at least six months, or the typical lifetime of a lab mouse.