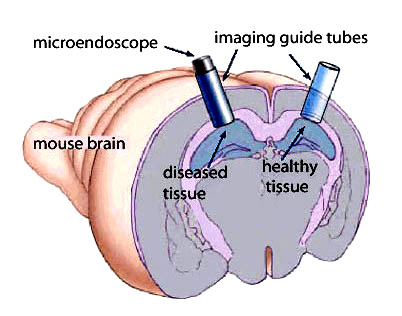 Probing for pictures: A glass tube inserted deep into the brain allows researchers to visualize the same brain regions over time.

A new technique allows researchers to watch the long-term effects of disease on the brain, according to a study published in the February Nature Medicine. The approach could help scientists study changes in the brain that result from neurological disorders such as autism.

Traditional light microscopy can only penetrate a short distance into tissue, preventing researchers from visualizing deeper brain regions — such as the hippocampus — in live animals. Cutting out the section of interest — the usual approach to deep-brain imaging — limits researchers to a snapshot in time in a single animal.

In the new method, researchers insert a glass tube deep into a live mouse brain. Because the tube seals the incision, the animal can be kept alive after surgery.

The tube is open at one end, allowing for repeated insertion of an optical probe connected to a microscope to the same precise location each time. The team photographed the animals in the study repeatedly over seven weeks, and in some cases over the course of a year.

Using this technique, they documented changes in the branching of neurons in the hippocampus. Researchers can also see tumors grow in the brain after the injection of cancer cells, and simultaneously compare the diseased tissues with healthy ones.

The technique will allow for consistent results for long-term studies because each time point can be taken from the same mouse. It also decreases the need for numerous research animals.