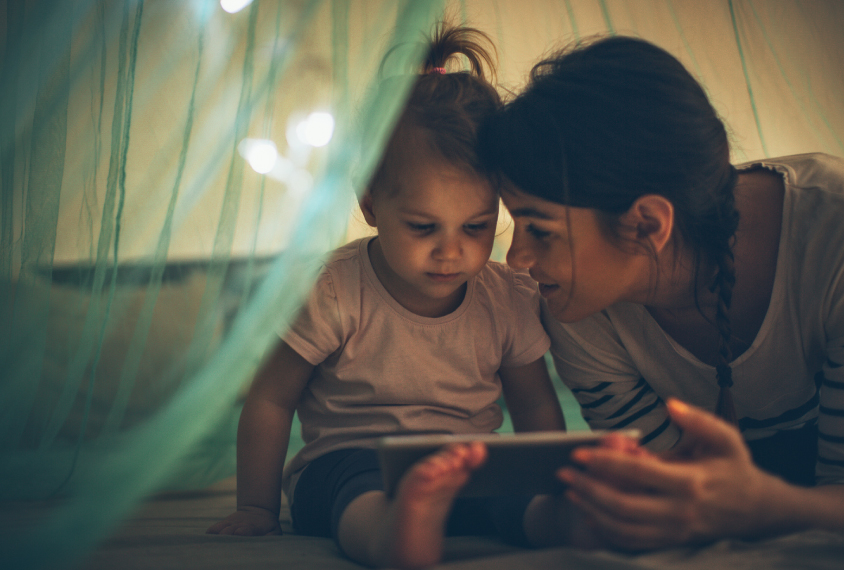 Parental supervision: Caregivers facilitate a remote assessment involving a series of tasks, such as reading a child a book.

A new telehealth test offers researchers a way to measure a child’s development and detect signs of atypical behavior remotely1. It could help them recruit more people for their studies and adjust their methods to a socially distant world.

Autism researchers generally assess children in person. This means families participating in research often must travel, which can be costly and time-consuming and present a barrier for those living in rural areas or who have children with challenging behaviors.

Researchers have been pushing for telehealth-based approaches in order to improve access. Since the start of the coronavirus pandemic, scientists have also had to quickly adapt their studies to online or virtual formats.

But most telehealth approaches allow researchers to gather only certain types of data. Researchers can use videos to observe a child’s behavior following specific stimuli, for example2. Or they can use wearable devices to passively track biomarkers, such as vocalizations or heart rate, gathering data on broad patterns of activity.

The new assessment — called the Parent-Administered Neurodevelopmental Assessment, or PANDABox — enables researchers to monitor biomarkers’ responses to specific stimuli, a method commonly used in the lab to pick up on potential signs of autism. It consists of a standardized protocol and set of tools to collect lab-grade data on infants’ behaviors and biomarkers at home.

PANDABox could help make research more cost-effective and accessible to a greater diversity of people, “not just those with enough privilege and resources to come to us,” says Bridgette Kelleher, associate professor of psychological sciences at Purdue University in West Lafayette, Indiana, who led the research.

The remote assessment could also help researchers get a more realistic snapshot of children’s behaviors, because children may act differently in a lab than they do at home.

Researchers start by sending a caregiver a ‘PANDABox’ containing the necessary equipment, such as a computer pre-loaded with slides and software, a heart-rate monitor, a wearable vocal recorder, a webcam and a variety of toys.

At the time of a test, a researcher coaches a caregiver, over the phone and via video conference, on how to set up the equipment. The researcher then guides the caregiver through a series of tasks to test a child’s developmental skills. Such tasks can include having the child watch a video or play with a toy, or having the caregiver read the child a book.

During the test, the webcam, heart-rate monitor and vocal recorder capture data, which the researchers can synchronize later with the timing of the tasks. Once the testing is complete, the caregiver sends the box back.

Researchers tested PANDABox on 16 infants with Down syndrome, aged 5 to 19 months. For each assessment, research assistants gauged whether the infants were engaged in tasks and rated how well the parents administered tasks, compared with research standards in the lab. The team also had caregivers complete an anonymous survey about the experience, rating their level of satisfaction with privacy, ease of use and other aspects of the assessment.

Almost every family rated PANDABox highly — they described their satisfaction level as “good” or “excellent” on 97 percent of the survey questions, the researchers reported in July in Frontiers in Psychology. Infants also took well to the test: Although fussiness and fatigue are common problems during assessments, the children remained engaged throughout nearly all of the PANDABox tasks.

In addition, caregivers administered 94 percent of the tasks with only minor deviations from the standardized protocol. Overall, these findings suggest that, with guidance, caregivers are capable of collecting high-quality data, the researchers report.

Data loss was also generally low, although 25 percent of the heart-rate data were absent and 13 percent were partially missing, largely due to programming errors. Because such errors should be preventable, data loss rates may improve in the future, the researchers say.