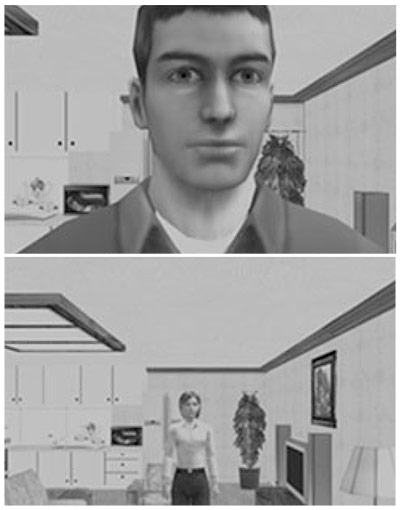 Near or far: Using a joystick, children can adjust their distance from avatars expressing emotions such as happiness, disgust or anger.

Children with autism are likely to keep more distance between themselves and a welcoming avatar than controls do in a virtual reality setup, suggesting that they derive less pleasure from social situations, according to a study published 17 January in the Journal of Autism and Developmental Disorders1.

Autism is characterized by social deficits, which may manifest as a lack of eye contact or interest in social situations, or unusual use of language. People with the disorder may be socially anxious, miss social cues or simply not find social interactions rewarding.

In the new study, researchers examined these different explanations using a new virtual reality system. They instructed 19 children with autism and 23 controls to identify the emotions the avatars express and to use a joystick to react to the avatar.

At the start of the test, the children were positioned midway between the closest and farthest possible distances from an avatar. Each child interacted with 48 avatars expressing one of six emotions, which ramped up in intensity throughout the interaction.

For example, a happy avatar first welcomes the child home and then tells him or her that it is happy the child got home so early and that it made the child’s favorite dinner. Through the course of the interaction, the avatar’s expression evolves from a neutral tone and slight smile to an excited tone and broad smile.

The children with autism were just as good as controls at identifying the avatars’ emotions. And both groups of children moved closer to the happy avatars and farther away from those showing disgust or anger. However, on average, the children with autism did not move as close to the happy avatars as the controls did. They retreated just as far from the disgusted and angry avatars.

This suggests that children with autism do not show an aversion to social interactions but may be less drawn to them, the researchers say.

The children with autism who scored themselves as having high social anxiety on the Manifest Anxiety Scale for Children moved the farthest away from the disgusted avatars, the study found. Interestingly, this correlation did not hold for typical children.