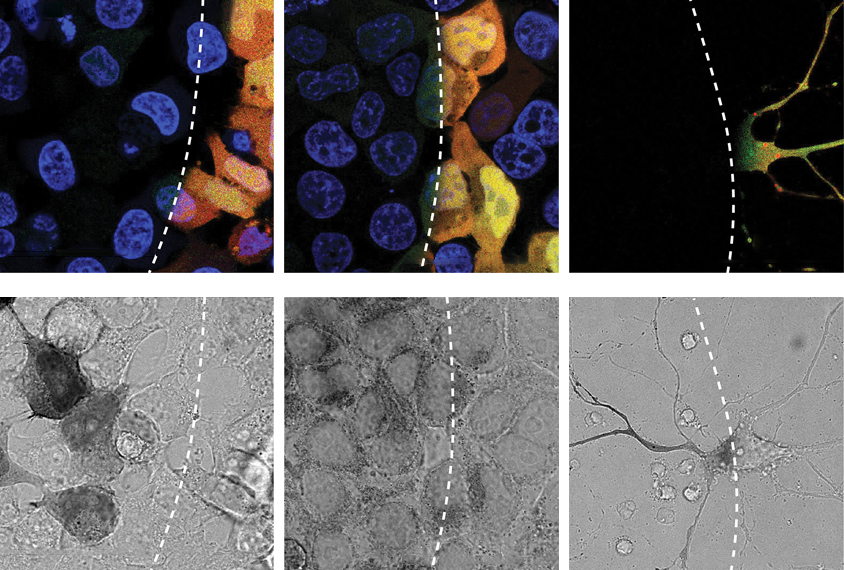 A new form of optogenetics activates or inhibits neurons for longer than previous versions do, according to a December study in Science Advances. This technique could potentially be used in the laboratory to durably turn up or down the activity of neurons involved in seizures or that contribute to the brain signaling imbalance thought to underlie autism, the researchers say.

Traditional optogenetics turns neurons on or off with flashes of light that open or close light-sensitive ion channels. Opening the channels that add a positive charge to a neuron’s interior prompt the cell to fire, whereas opening those that increase its negative charge dampen firing. Manipulating conductivity in this way in animal models of autism has helped to identify the cells responsible for some of the condition’s traits.

But the technique’s effects are short-lived: “Once you stop illuminating the cells, [their charge] goes back” to its original baseline level, says Jia Liu, assistant professor of engineering and applied sciences at Harvard University, who co-led the new work. “You force the cell to be excited or inhibited. But nothing in the circuit’s intrinsic property has been manipulated,” he says.

Because the polymer remains in place, maintaining the membrane’s new capacitance even after the light shuts off, it could theoretically encourage the rest of a cell’s network to adapt a new functional pattern, Liu says. “The cell’s property has been fundamentally changed.”

Liu and his colleagues used a harmless virus to deliver the gene for the light-sensitive enzyme into cultured human kidney cells. They then treated the cells with one of two amine-based monomer solutions, depending on whether the goal was insulation or conductance. When they activated the enzyme using light, it oxidized each monomer, causing it to polymerize on and in the cell membrane.

The researchers next tested the polymers in cultured rat cortical neurons. There, too, light caused the polymers to form and shift the cell membranes’ electrical properties: The insulating polymer decreased membrane capacitance and increased neuronal excitability, and the conducting polymer had the opposite effect.

The longer a cell was exposed to light, the more polymer built up on its membrane, the team also observed. Liu and his team did not test how long the polymer can last, but in their experiments the membrane capacitance changes remained after three days, the latest time point they measured.

This technique builds on work Liu did as a postdoctoral researcher in Zhenan Bao’s lab at Stanford University in California, in which he used a similar enzyme to build synthetic polymers on neurons and alter their membrane capacitance. That enzyme was not light-sensitive, though, and it produced a toxic byproduct: hydrogen peroxide. The amount of hydrogen peroxide given off was sufficient to kill cells, Liu says.

The new light-sensitive enzyme still produces a toxic byproduct, a reactive oxygen species. But the enzyme’s light sensitivity makes it possible to carefully guide the synthetic polymer growth by changing the timing of a cell’s light exposure, he says. By making the neurons express only small amounts of the new enzyme and using light to more precisely control how much polymer is produced, the amount of toxic byproduct seems to be minimized: There was no significant difference in the ratio of live to dead neurons between treated and untreated cells, regardless of which polymer was produced, cell staining revealed. Still, there were slightly elevated levels of dead cells in the treated groups. Further work is needed to reduce this toxicity, Liu says.

“This work represents a significant improvement [over] their previous technology, especially in terms of toxicity, and therefore may lead to better in vivo studies,” says Longzhi Tan, assistant professor of neurobiology at Stanford University, who was not involved in the work. The new technique could be useful for probing transcriptional and epigenetic changes after optogenetic manipulation in both wildtype mice and in mice modeling human conditions, he says.

Liu and his colleagues are next testing whether their optogenetic technique works in the brains of living mice. They are also screening different enzymes in search of ones that do not create toxic byproducts, especially during prolonged periods of illumination.