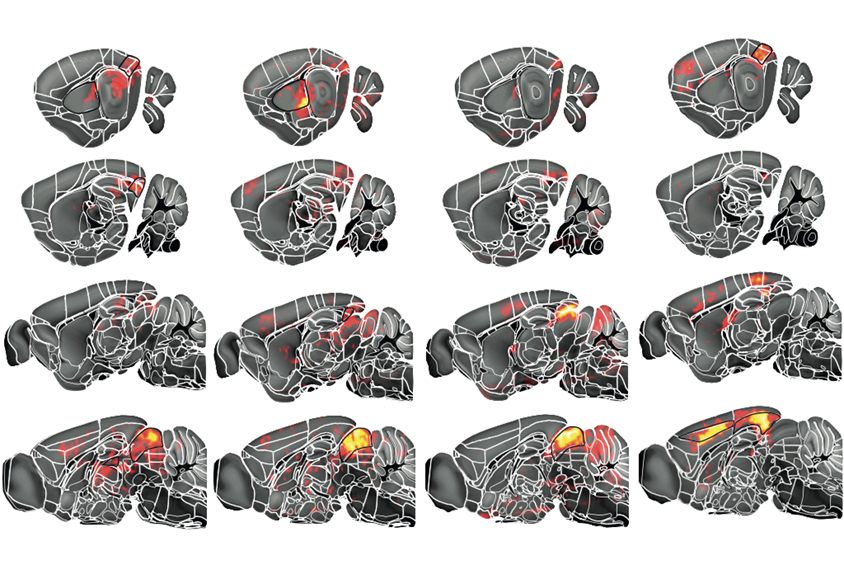 A new high-resolution imaging device tracks widespread brain activity in living mice, enabling researchers to map neural circuits across the entire brain. The tool could help scientists understand how these circuits are altered in autism.

Researchers usually track activity throughout the brain by using functional magnetic resonance imaging (fMRI), which measures blood flow as a proxy for neuronal activity. But the technology’s resolution is usually limited to about 1 or 2 millimeters — too low for mapping neural circuits. It also requires animals to remain still, making it difficult to use in mice that are awake.

Functional ultrasound devices, which use high-frequency sound waves to detect changes in blood flow, have 10 times the resolution of fMRI and can be used in mice that are active, but most can only send and receive sound waves in one plane, resulting in single 2D images. To reconstruct the whole brain, researchers have to move the device repeatedly and align many consecutive slices, which is time-consuming.

To overcome these limitations, researchers built a functional ultrasound probe that can capture about 600 cubic millimeters of tissue, enough to see most brain regions in a mouse in a single snapshot.

Task tracer: Functional ultrasound records activity throughout the brain of a mouse while it reaches for a water dispenser and drinks a droplet off its paw.

“Now we see the entire brain at once,” says Alan Urban, assistant professor of neuroscience at Katholieke Universiteit Leuven in Belgium, who led the research. Urban and his colleagues described the device in December in Neuron.

The ultrasound probe has a resolution of up to 175 micrometers and is made up of 1,024 elements in four sections, arranged into a square. Each section sends and receives sound waves in quick succession, enabling researchers to create a 3D image of the brain in real time. The team also developed software that maps brain activity to a standard brain atlas.

The researchers tested the device in mice and rats. Because ultrasound cannot pass through bone, they removed part of each animal’s skull and allowed it to recover. Then they fixed its head in place and positioned the ultrasound device above its brain.

In one experiment, they brushed a comb or glass tube against a mouse’s whiskers — either stimulating all the whiskers on one side of its face or one whisker at a time. When they stimulated whiskers on one side of a mouse’s face, the device registered brain activity in cortical structures known as ‘barrels’ — which receive input from the whiskers — in the opposite brain hemisphere. Stimulating three individual whiskers evoked activity in different barrels, shown to correspond to particular whiskers.

In another setup, they trained a mouse to respond to a flashing light by reaching for a water dispenser and drinking a droplet off its paw. During this task, the researchers were able to map brain activity in both hemispheres, including in the outer ‘cortical’ layer and deeper ‘subcortical’ areas. The device recorded activity in arousal, visual, motor and sensory circuits — including those related to smell, which mice use to detect water.

Separately, the team used optogenetics to activate three different subsets of neurons in the superior colliculus, a part of the brainstem that plays an important role in visual processing. They then used the imaging device to trace brain circuits linked to each type of cell. They also activated excitatory neurons in the retrosplenial cortex, another area that processes visual information, and mapped the circuits that those cells connect to.

The researchers are working on a lightweight version of the probe that could potentially be used in freely moving animals.