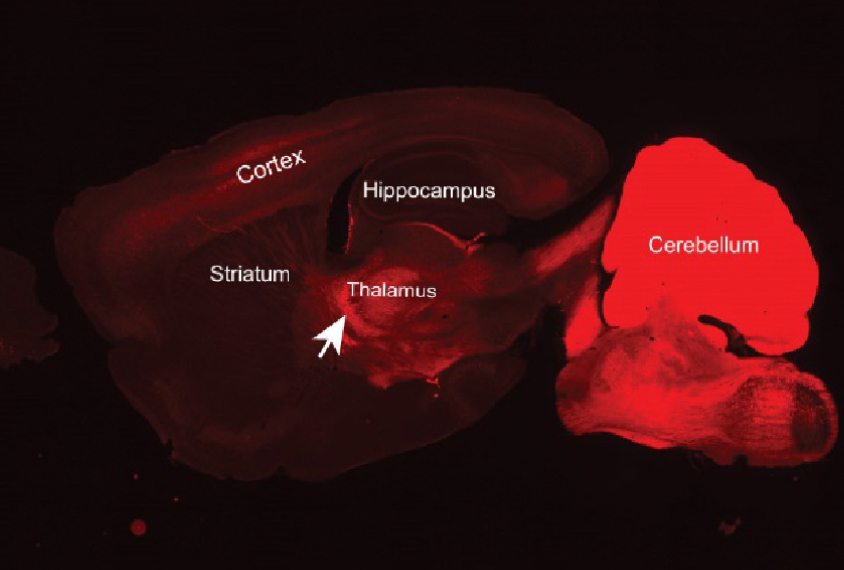 Light sensor: Engineered mice express a highly sensitive protein in neurons throughout the brain (red) that can be stimulated without an implanted light source.

A new, minimally invasive technique allows researchers to activate neurons in the brains of mice and monkeys by using a light source located outside of the head1.

The method involves optogenetics, a technique in which light-sensitive proteins called opsins are engineered into neurons. Researchers can then use pulses of light of different wavelengths to activate or silence the cells2. Scientists have used optogenetics to study autism, manipulating brain circuits in animal models of the condition.

Optogenetics experiments generally involve surgically implanting an optical fiber into an animal’s brain to shine light on neurons. But that procedure can damage tissue and alter neuronal activity; in young mice, it can lead to abnormal brain development. An implanted fiber also usually stimulates only about 10 cubic millimeters of brain tissue, because light does not easily pass through the tissue3.

The new method uses a new type of highly sensitive opsin called ‘step-function opsin with ultra-high light sensitivity,’ or SOUL, to activate neurons without implanting optical fibers. Using SOUL, scientists can manipulate circuits in any part of the mouse brain and in large swaths of a macaque’s cerebral cortex by shining light onto the surface of the brain or skull.

SOUL improves upon another family of opsins, called stabilized step-function opsins, that are designed to remain active for 30 minutes after light exposure. The researchers engineered the SOUL opsin’s genetic code to include a mutation known to increase light sensitivity in a different type of opsin, channelrhodopsin-2. They then injected viruses carrying the gene encoding the SOUL opsin into the brains of mice and macaques.

Shining a light outside of the skull activates SOUL-expressing neurons deep in the mouse brain, the researchers reported in April in Neuron. Staining proteins produced by active neurons with antibody markers revealed neural activation in the lateral hypothalamus, one of the deepest brain regions, about six millimeters below the skull’s surface. This depth suggests that neurons in any part of the mouse brain can be modulated, the researchers say.

Neural activation in the lateral hypothalamus was also strong enough to alter the animals’ behavior. Food-deprived mice lowered their food consumption for 10 minutes following exposure to blue light, which activates SOUL, the researchers report. After a pulse of orange light, which deactivates SOUL, the mice returned to their normal feeding patterns.

A beam of blue light positioned above the dura, a thick membrane that surrounds the brain, increases the firing rate of neurons at any depth in the cortex, the researchers report.

The team induced SOUL expression in 140 cubic millimeters of the brain, but by increasing the number of viral injections and the size of the light beam, scientists may be able to activate a much larger cortical volume, the researchers say.

Activating macaques’ neurons using SOUL also generates synchronized neural activity, or oscillations, thought to be disrupted in autism. This suggests that SOUL can be used to study the role of oscillations in brain function.

The new method may reveal how specific cell types or brain circuits contribute to autism, the researchers say. It could also be used to manipulate brain circuits throughout development to pinpoint how they might differ in autism and when those differences arise.