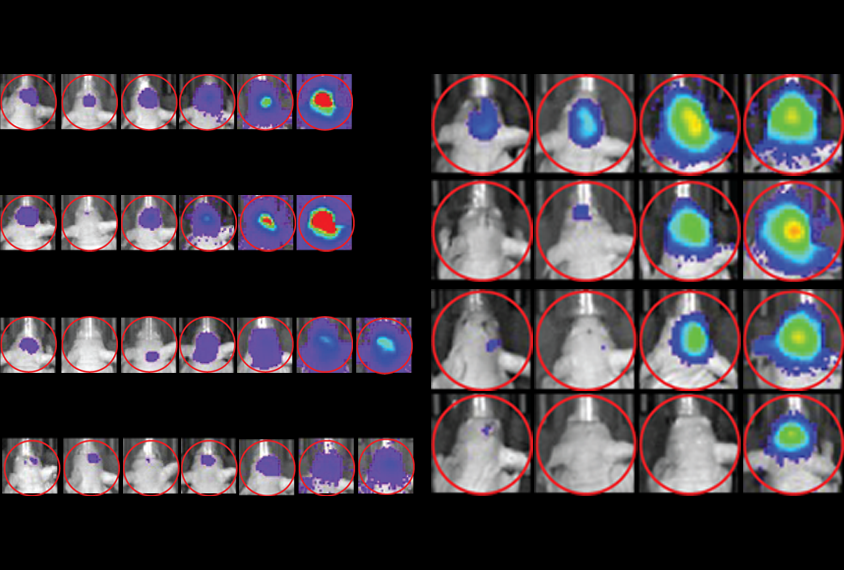 A novel pair of drugs can selectively inhibit an autism-linked cell-signaling pathway in the brain while leaving it unaffected in the rest of the body, according to a new study.

Some researchers have tried to treat these conditions with rapamycin or other drugs that subdue mTOR. But because these drugs can circulate throughout the body, they can cause metabolic side effects, says lead investigator Kevan Shokat, professor of cellular and molecular pharmacology at the University of California, San Francisco.

For example, blocking mTOR signaling outside the brain can cause developmental deficits in children, says Ziyang Zhang, assistant professor of chemistry and chemical biology at the University of California, Berkeley, who worked on the new research as a postdoc in Shokat’s lab.

So the team developed two new drugs that each perform a specific task: RapaLink-1 blocks mTOR activity while RapaBlock, which cannot cross the blood-brain barrier, stymies RapaLink-1 everywhere but in the brain. This targeting makes it possible to skirt side effects, they say.

Shokat, Zhang and their colleagues tested their one-two punch in a mouse model of glioblastoma, an aggressive brain cancer marked by mTOR hyperactivity. The treated animals’ tumors grew significantly more slowly than those in untreated mice, and treated animals showed none of the weight loss, metabolic changes or liver toxicity mTOR inhibition typically causes. The work appeared in September in Nature.

The safest and most effective pharmaceuticals bind to only one protein in the body, a specificity that can make drug discovery a one-off, Shokat says. But this new approach enables the formulation of tissue-selective drugs and could be adapted to various ends, including other conditions that involve overactive mTOR signaling, he says.

One possible application is in PTEN hamartoma tumor syndrome, says Bryan Luikart, associate professor of molecular and systems biology at Dartmouth College in Hanover, New Hampshire, who was not involved in the new work. Studies are already underway for mTOR-inhibiting drugs to treat tumor growth in people with the syndrome.

Rapamycin treatment prevents neuronal overgrowth in newborn mice with PTEN mutations, but it also impedes the mice’s growth overall, Luikart says. So future studies should investigate whether the RapaLink-1 and RapaBlock mix can rescue neuronal defects as effectively while leaving development intact.

One downside is RapaBlock’s large molecular size; it needs to be given intravenously and is not small enough to be delivered via a pill.

Another important limitation of the approach is that treating mTOR hyperactivity will not affect the root causes when a mutation turns on mTOR from somewhere upstream, Luikart says. “The limitation is the exact same limitation there is with rapamycin itself.”

Shokat says his team hopes to apply the approach to drugs besides those that target mTOR. They created a RapaBlock-sensitive version of an investigational Parkinson’s drug that is toxic to the lungs, for example. Pairing it with RapaBlock curbed the drug’s action in a dish.

At the moment, Zhang and Shokat do not have plans to pursue autism-linked conditions. “If you have any suggested targets that would work in autism and would be a good fit, it would be great to hear from people,” Shokat says. “I would love to work on that.”