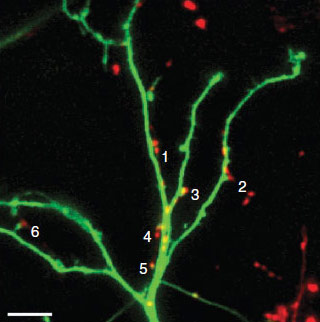 Crimson stems: A red molecule that fluoresces when neurons send chemical messages overlaps at active junctions (for example, 3 in the picture above) with a green indicator that lights up when partner neurons receive signals.

A pH-sensitive red fluorescent molecule allows researchers to simultaneously monitor two different types of neuronal activity, according to a study published 27 May in Nature Neuroscience1.

A number of molecules fluoresce in response to chemical changes that reflect cellular activities, such as changes in calcium levels after neurons fire. By genetically engineering these molecules into cellular DNA, researchers can study subpopulations of neurons.

Existing indicators of neuronal activity are all derivatives of the green fluorescent protein (GFP), meaning that they look the same under a microscope and so cannot discriminate between simultaneous cellular activities.

In the new study, researchers engineered a new molecule, dubbed pHTomato, that emits light in the red spectrum and does not overlap with GFP. The molecule is pH-sensitive, emitting more fluorescence in a neutral environment than in an acidic one.

The researchers fused pHTomato to another protein, called VAMP2, which bridges the membranes of sacs containing chemical messengers. When neurons fire and release the contents of these sacs, pHTomato is exposed to the neutral pH outside of cells and fluoresces.

The researchers then looked at populations of cells expressing both the pHTomato/VAMP2 fusion protein and a GFP indicator that lights up at the signal-receiving ends of activated neurons. Yellow spots, which result when the red and green colors overlap, indicate active synapses.

The researchers also expressed pHTomato in neurons that make a variant of a light-sensitive membrane protein called channel-rhodopsin (ChR) that responds to green light. A technique called optogenetics enables researchers to manipulate neuronal signaling by activating ChRs with beams of light.