A technique that expands tissue before spotting and sequencing RNA — the molecular messenger for DNA — enables researchers to see where particular genes are expressed. The method could shed light on the mechanisms by which single neurons form multiple different connections in the brain.

To gauge gene expression, researchers typically isolate RNA from ground-up tissue or cells, which prevents them from seeing where it was located. Other techniques, such as fluorescent in situ sequencing (FISSEQ), can flag and sequence RNA within cells, but they lack the resolution needed to spot the molecules within dendrites — the signal-receiving branches of neurons — and dendritic spines, protrusions involved with memory and learning.

In the new method, called expansion sequencing, researchers paired FISSEQ with a method that uses a water-absorbing polymer found in baby diapers to expand tissue while keeping its organization intact. Stretching tissue before sequencing it increased the method’s spatial resolution by about three times compared with using FISSEQ alone.

It also revealed “all sorts of weird stuff out on the dendrites of neurons,” says Edward Boyden, professor of neurotechnology at the Massachusetts Institute of Technology, who co-led the new work. 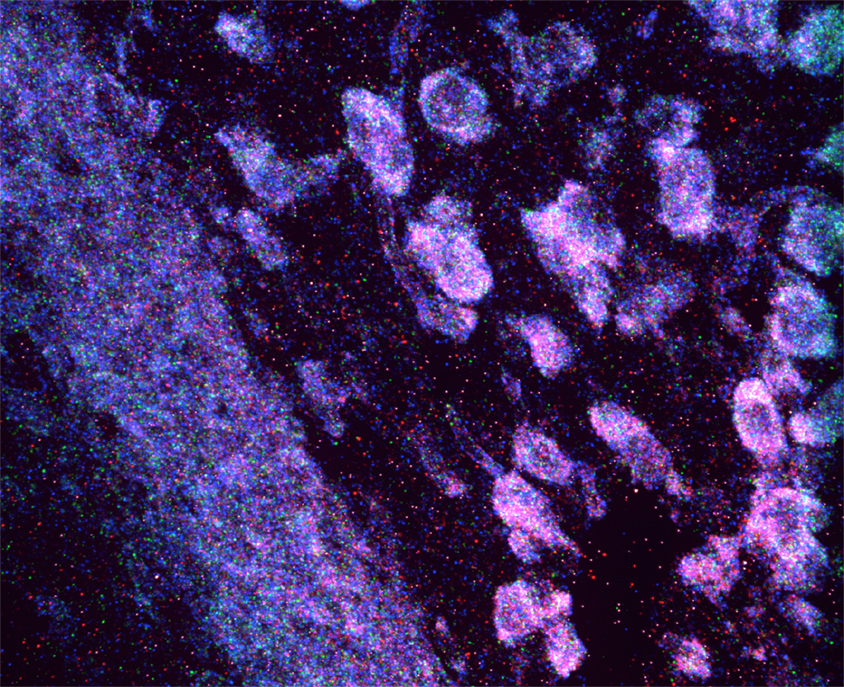 Mind map: Researchers used expansion sequencing to identify cell types and their layout within a brain slice from a mouse.

The team tested the method in a variety of tissue samples, including brain slices from mice and a biopsy from a person with breast cancer. They embedded the tissues in the polymer and added water to swell them.

They then sequenced RNA transcripts by creating DNA copies of the molecules and attaching bases, or ‘letters,’ tagged with fluorescent dyes to each letter in the copied sequence. Recording the sequence of colors with a microscope revealed the sequence of individual RNA molecules.

The method detected thousands of genes expressed in various sections of the mouse brain, the researchers reported in January in Science.

The team also spotted unexpected transcripts in dendrites, such as RNAs that code for transcription factors — proteins involved in regulating gene expression — and RNAs that contain noncoding regions, presumed to be cut out when the transcripts leave the nucleus.

In addition, expansion sequencing could target a specific set of RNAs of interest within cells. The team used probes tagged with DNA barcodes that bind only to particular RNA sequences. Sequencing the barcodes then identified where specific RNA molecules were located.

In one test, the team targeted 42 genes known to be expressed in different types of neurons. By analyzing cells’ gene expression profiles, they identified 15 cell types in a slice from a mouse brain. They also charted the cell types’ distribution in the visual cortex.

In another test, the researchers searched a slice from a mouse brain for 34 RNA transcripts previously found in dendrites. Mapping the transcripts’ locations within two types of cells revealed distinct sets of RNAs enriched in cell bodies, dendrites and spines. In both cell types, the team also found similar RNAs distributed along dendrites, suggesting that there may be general rules that govern how RNA is shipped to these neuronal projections.

Expansion sequencing could help scientists better understand how cells interact, the researchers say. It could also help them explore differences in gene expression and neuronal wiring that may underlie autism.