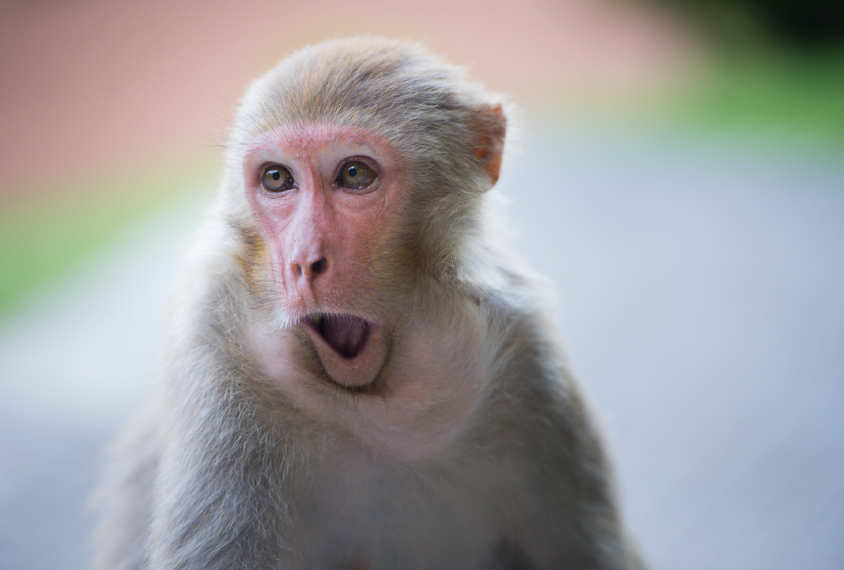 Identifying these networks may help scientists study the neural basis of social communication in monkey models of autism.

The networks are at work when monkeys observe other monkeys, interact with other monkeys or produce facial expressions. The results appeared 25 July in Neuron.

Other studies have tracked neural activity in monkeys when they see the faces of other monkeys. But researchers could not be sure which brain regions coordinate the more active components of social interaction, particularly how monkeys form facial expressions.

In the new study, the researchers scanned the brains of 10 male rhesus macaques while the monkeys viewed video clips of another monkey looking either to one side or directly at the camera. The videos are designed to trigger what happens in a monkey’s brain when it passively observes or interacts with another monkey. The researchers used a video camera to record the watching monkeys’ gaze and facial movements in response to the stimuli.

Simply seeing another monkey activates a widespread network of visual brain areas and other regions responsible for processing information about faces, the researchers found. Areas in and around the medial prefrontal cortex, which regulates social cognition, also come online.

When the watching monkey sees the monkey on film looking directly at the camera, it shows increased brain activity in a smaller network of regions in and around the medial prefrontal cortex. The watching monkey produces facial expressions, such as lip smacks and bared teeth, almost solely during this type of social interaction.

Generating facial expressions also activates a distinct brain network in the monkey brain. This activity occurs in various motor regions, including regions thought to be evolutionary precursors to Broca’s area, the speech hub of human brains.

The researchers also looked at each network’s functional connectivity, the degree to which brain regions within that network are active simultaneously. They found strong connectivity within the networks involved in viewing other monkeys and producing facial expressions, and weak connectivity between these two networks.

The findings suggest that these networks act as distinct functional units. (Connections within the smaller social-interaction network are weaker than in the other two networks, so its identity as a separate unit is less clear.)

Using electrophysiology, the team plans to study the activity of individual neurons within these networks while monkeys perform social-interaction tasks. This work may yield a more precise understanding of the neural basis of social communication.