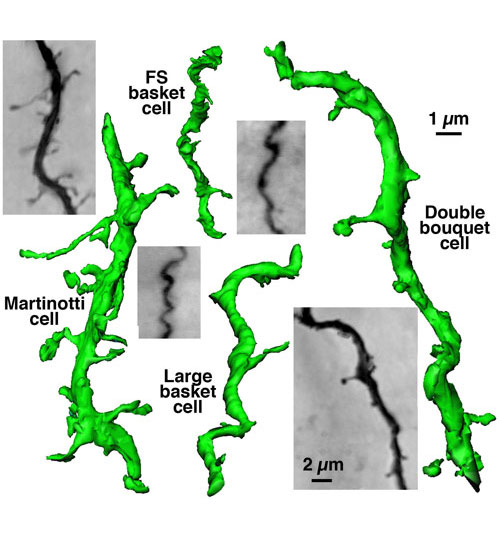 Family trees: The dendrites of different interneurons, which calm signals in the brain, have some core features in common.

Researchers have created detailed three-dimensional reconstructions of the numerous complex branches of dendrites, the signal-receiving ends of neurons, according to a study published 13 September in Scientific Reports1. The study shows that dendrites from four different types of neurons have similar core properties, such as thickness and shape, which could be abnormal in people with neurological disorders such as autism.

Several studies have implicated synapses, the junctions between neurons, and dendrites in autism. For example, autism-linked mutations in neuroligin 1 lead to fewer dendrites in the neurons of tadpole embryos2.

Several studies have also shown that dendritic spines, small projections that form on some dendrites and play a key role in learning and memory, are abnormal in mice that model fragile X syndrome and in the brains of individuals with autism.

In the new study, researchers looked at 85 segments of various dendritic branches in four neurons from the rat frontal cortex, a brain region responsible for higher-order cognitive functions. The neurons are all types of interneurons, which inhibit signals in the brain: a Martinotti cell, a fast-spiking basket cell, a double bouquet cell and a large basket cell.

In general, the thickness of the dendrites tapers quickly over the first 50 micrometers, but then stays relatively consistent, the study found. The researchers also discovered that the dendritic cross section is oval, not round as was generally believed. As the dendrites get farther away from the cell body, they twist and become rounder.