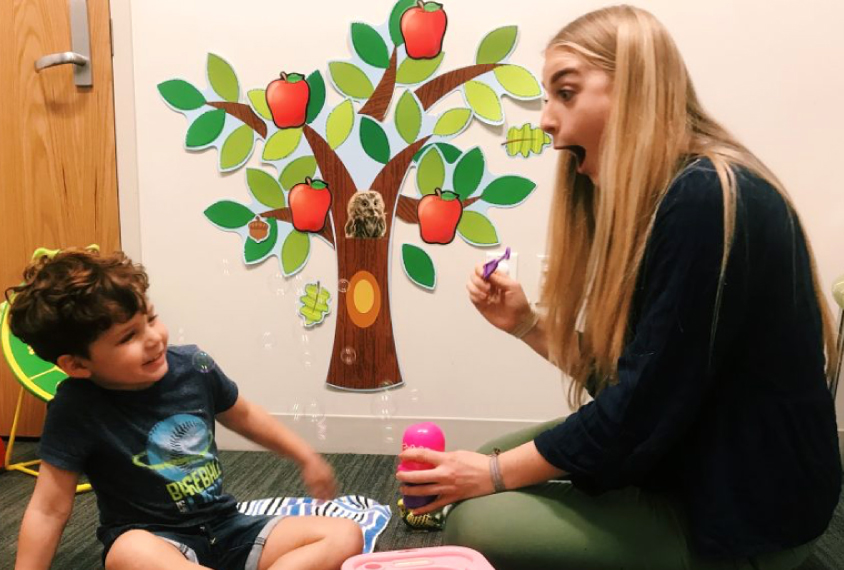 Chat room: A test that consists of eight fun activities elicits speech from children with autism who speak few words, across a wide age range.

Clinicians generally use standardized tests to track autistic children’s language development as they grow, but these measures often miss changes in those who rarely speak. Recording a child’s speech while she plays freely can offer scientists a more representative snapshot of her natural, everyday language, but this approach may not be appropriate for teenagers.

During the test, a researcher guides a child or adolescent through eight activities — such as looking for paper animals hidden around the room, making a snack or retelling the plot of a short movie — while recording audio on a smartphone. The researcher also asks questions to encourage the child to speak.

Later, other researchers listen to the recording and use software to tally ‘utterances,’ defined as at least one consonant-vowel combination; and ‘conversational turns,’ instances when either the child or the researcher produced one or more utterances during an exchange.

The team used ELSA to assess 46 minimally verbal children and adolescents with autism, aged 6 to 19 years. They also had parents fill out the Social Communication Questionnaire and the Vineland Adaptive Behavior Scales to measure communication skills.

ELSA captured about 20 minutes of natural speech, the researchers reported in September in Autism Research. Children and adolescents produced about four utterances and took three conversational turns per minute, on average, suggesting that ELSA can elicit speech even from minimally verbal people.

Utterance frequency and conversational turns correlate with communication scores from the Social Communication Questionnaire and the Vineland Adaptive Behavior Scales, suggesting that they are valid measures of communication and language skills, the researchers report.

In another test, the team created a toddler version of ELSA by adapting the activities for a younger age group. They evaluated language skills in 19 autistic toddlers aged 20 months to 4 years. The team also evaluated a separate group of 17 children, aged 4 to 6 years, with both versions of the test and compared results.

Results from the toddler version jibed with a child’s language scores on the Mullen Scales of Early Learning, the researchers report.

Both versions of ELSA capture a comparable number of utterances per minute and conversational turns per child. These findings indicate that the two versions could be used to measure and compare language skills at different ages.

Instructions for both versions are freely available online.