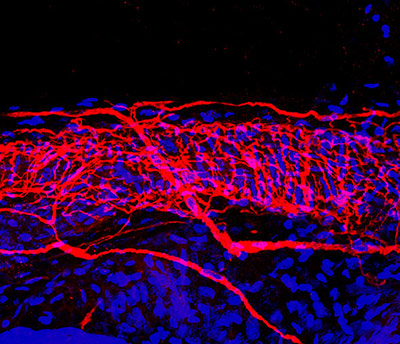 Researchers have repurposed a technique called ‘SNAP-tag labeling’ to illuminate and manipulate subsets of neurons in mice1.

The technique, described8 December in Nature Methods, may help researchers study neural circuits that are tough to access with traditional labeling methods such as fluorescent antibodies.It can also be used to kill subsets of neurons in living mice, allowing researchers to better understand these neurons’ functions.

The SNAP-tag protein is an abnormal version of the DNA repair protein O6-alkylguanine-DNA alkyltransferase.This protein has an affinity for a collection of small molecules resembling the DNA building block guanine. By incorporating these guanine derivatives into light-emitting compounds called fluorophores, researchers can light up tissues that express the SNAP-tag protein.

SNAP-tag labeling has primarily been applied to cell culture. This is the first time researchers have used it to label specific subpopulations of cells in living mice.They did this by genetically engineering mice to express the protein at the cell membranes of sensory neurons. They then injected the mice with synthetic fluorophores containing the molecule that binds the SNAP-tag.

This approach lit up sensory neurons in the skin of the mice as visualized using fluorescence microscopy of dissected tissue.

Because the synthetic fluorophores are much smaller than the fluorescent antibodies traditionally used to label cells, they can penetrate more deeply into tissues. As a result, they illuminate the fine branching of nerve endings in the skin in greater detail.

They also glow longer than do fluorescent proteins engineered for expression in animals — another common approach for imaging cells.

The method also provides detailed images of neurons in mouse corneas labeled with fluorescent molecules while the mice were alive and later dissected. And it can illuminate neurons in postmortem brain and spinal cord tissue that has been made transparent.

The SNAP-tag protein can also be used to destroy subsets of neurons. The researchers added the SNAP-tag binding site to fluorescein — a compound that releases free radicals in response to light, thus killing the cells that contain it. This allowed them to selectively eliminate sensory neurons in the paws of live mice.

The researchers hope to develop SNAP-tag-binding molecules that fluoresce in response to changes in ion concentrations in neurons. This would allow them to visualize neuronal firing in living mice.