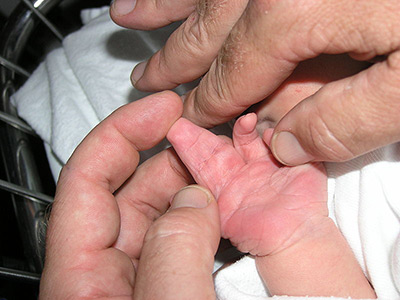 Wikimedia Deep dictionary: A new resource catalogs thousands of symptoms and diseases, such as 2-3 finger syndactyly, a condition in which the second and third fingers are fused together.

The Human Phenotype Ontology (HPO) project has assembled more than 10,000 standardized terms for human diseases and the symptoms that accompany them, researchers reported 1 January in Nucleic Acids Research1. These terms make it easy for researchers to search databases for certain conditions or symptoms, and to compare data across model systems.

The project may aid genetic analysis of complex disorders such as autism by allowing researchers to group individuals based on shared symptoms. It may also help to standardize symptom descriptions so that it’s easier to combine data from different sites.

Each term has a unique HPO number and a list of synonyms. About 65 percent of the entries so far include a detailed explanation written by an expert. Many of the annotations list the frequency of a given symptom in the population.

The project cross-references several of the terms to other medical symptom databases, such as the International Classification of Diseases, which is primarily used by doctors to communicate with insurance companies. It has linked more than 100,000 HPO terms to 7,354 genetic diseases listed in the Online Mendelian Inheritance in Man database, a comprehensive catalog of human genetic disorders.

For example, the HPO term for autism is HP:0000717. The list of 99 diseases and genes linked with this term includes related disorders, such as fragile X syndrome, as well as more obscure associations, such as Norrie disease, which leads to childhood blindness.