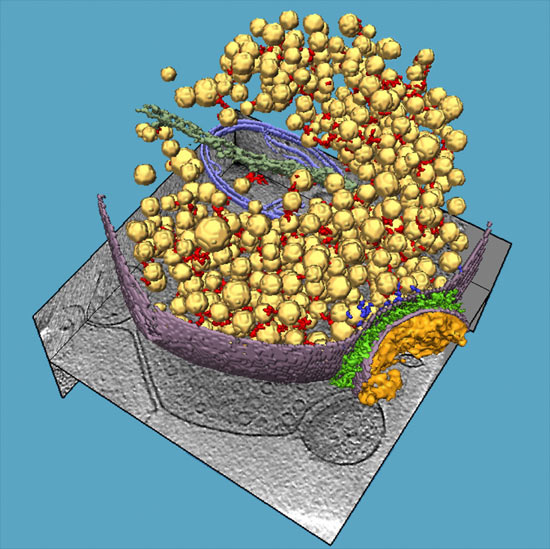 A chilling new technique shows the intricate and coordinated activity of previously mysterious pieces of the synapse, the all-important junction between neurons that allows cells to talk to each other.

The close-ups are so striking, they made the cover of the 11 January Journal of Cell Biology.

To capture this pretty picture, the researchers used a complex technique called electron cryotomography. They first froze rat brain cells in action at temperatures as low as -165 degrees Celsius, then looked at the cells at different angles using an electron microscope and, finally, reconstructed them in three dimensions on a computer.

There are other methods to look at synapses, but they require cells to be fixed in chemicals for a long time, which can distort the final product. Light microscopy, a much older and more popular technique, illuminates living cells, but only down to 400 nanometers.

Electron cryotomography seems to beat all of these: its flash-freezing preserves the cell’s structure, and its resolution is 5 nanometers — the size of a few dozen atoms.

The technique reveals the workings of some of the tiny protein filaments scattered across a synapse, whose role had been largely unknown before. One type of filament, dubbed ‘tethers’, anchors synaptic vesicles — the bubble-like structures that shuttle chemical messengers inside the cell — to the cell membrane. That way, when the cell receives the appropriate electric signal, the vesicles are in the right position to release the chemicals into the synapse.

Synapses allow cells to send and receive the electrical signals that underlie everything we think or do.  In autism, some of the most promising candidate genes keep the synapse working properly. These include those fingered by various autism linkage and association studies, such as SHANK, cadherin, neuroligin and neurexin, as well as some implicated in related syndromes, such as fragile X, Angelman syndrome, and obsessive-compulsive disorder.

With any luck, revealing the synapse in all of its splendor will help explain how these genetic tweaks transform a cell in action.