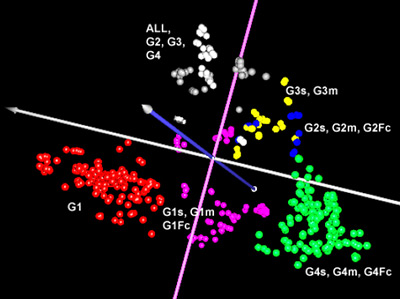 Group differences: Individuals with autism can be divided into four main groups of severity based on the measures of a diagnostic test.

Researchers can increase the power of studies that link genetic variants to autism by factoring in potential subgroups of the disorder, according to a report published 26 June in PLoS One1.

‘Linkage’ studies look to see whether any of the thousands of genetic variants found across the human genome are present only in family members affected by autism. But they need large numbers of participants in order to confirm that the connections they uncover are statistically valid.

Two of the largest autism linkage studies so far, which include 1,000 and 800 families respectively, each found a potential association, but did not replicate each other’s results, suggesting that they were not large enough2, 3.

One reason for this may be that autism is a diverse disorder caused by different combinations of genetic variants.

A 2009 study used the Autism Diagnostic Interview-Revised (a well-established diagnostic test for autism) to try to parse out subgroups of autism. By clustering symptoms, the researchers found that 2,000 individuals with autism could be classified into four subgroups: severe symptoms with language impairment, mild symptoms, moderate symptoms with savant skills and intermediate symptoms4.

In the new study, researchers explored whether separating families into these subgroups can increase the power of linkage studies. They analyzed 392 families that each have multiple children with autism.

They first divided the families into the four groups based on the symptoms of the proband — the first child in the family diagnosed with the disorder. In a second step, the researchers included only the families in which all the siblings with autism are members of the same subgroup.

Interestingly, previous studies have linked both regions to language deficits, which is a defining feature of this subgroup: 13q21 contains the language-related gene DIAPH3, and deletion of a region within 22q11 may lead to schizophrenia and language deficits.