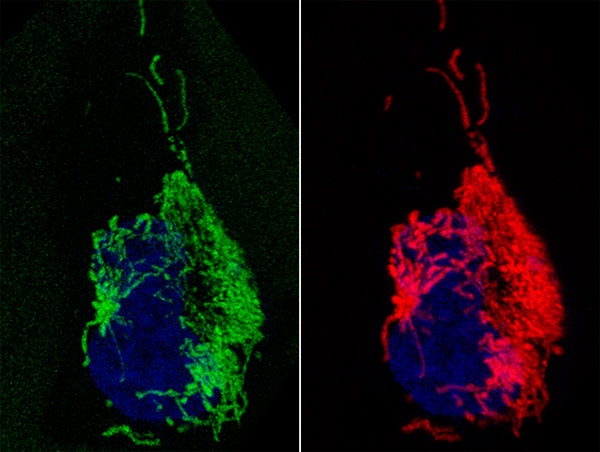 Glowing particles called ‘Sticky-flares’ can light up RNAs, the molecular blueprints for protein production, in living cells. Using these flares, described 20 July in Proceedings of the National Academy of Sciences, researchers can plot the paths of specific RNAs through a cell1.

Cells transcribe instructions for making proteins in the nucleus, creating RNAs that travel out to the places where the proteins will be produced. For instance, in neurons, RNAs encoding proteins involved in communication between neurons migrate to junctions called synapses. Defects in RNA trafficking and processing may be involved in certain forms of autism.

Researchers who wish to pinpoint the location of RNAs typically use fluorescent probes that can only enter cells if their membranes are first made porous. That process kills the cells.

The flares are fluorescently tagged sequences of nucleotides — the building blocks of DNA and RNA. They get into cells by associating with ingestible spheres that consist of a tiny gold particle studded with densely packed strands of nucleotides. They latch onto these nucleotide strands, which protrude from the gold particle like hairs on a person’s head. Each sphere carries multiple flares.

The flares remain near the gold, which quenches their fluorescence, until they encounter a complementary RNA. Upon meeting their matching molecule, they detach from the shorter and less sticky strands on the gold — and begin to glow. Each flare binds to one RNA and follows it around the cell, illuminating its path.

Researchers can use a fluorescent microscope to watch the glowing RNA move through the cell.In the study, the researchers tracked RNA encoding the protein beta-actin, which provides structural support to cells. In embryonic mouse cells, this RNA migrates toward regions that are expanding, as the growing cell requires more skeletal support.By contrast, in a human cancer cell line, the same RNA clusters near mitochondria, for reasons that are unclear.

The method may reveal whether RNA traffic is diverted in disorders such as autism.Some genes linked to autism — including RBFOX1 and FMR1 — interact with RNA, and mutations in these genes may lead to detours in RNA’s travels within the cell.