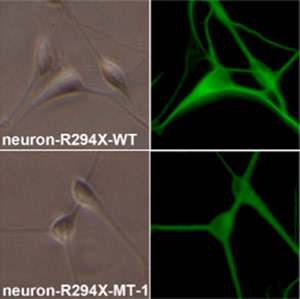 Shrunken cells: Neurons derived from stem cells that have a mutation in the Rett syndrome gene (above) are smaller than controls (top).

Shrunken cells: Neurons derived from stem cells that have a mutation in the Rett syndrome gene (above) are smaller than controls (top).

Researchers have derived neurons from stem cells to investigate mutations that lead to Rett and fragile X syndromes, according to two reports published in the past two months.

Rett syndrome is a developmental disorder caused by mutations in the MeCP2 gene, which is located on the X chromosome.

In the first study, published 26 September in PLoS One, researchersderived neurons from four women who each have a different MeCP2 mutation on one of their X chromosomes. One of these mutations, R294X, is present in five to six percent of individuals with Rett syndrome1.

In women, a process called X chromosome inactivation randomly silences one copy of the X chromosome in each cell throughout the body, meaning that some cells express the typical copy and others express the mutant. Once a somatic cell is reprogrammed to become a stem cell, and later a neuron, it retains its version of MeCP2, the study found.

This allowed the researchers to create pairs of neurons from each individual, one of which expresses the typical copy of MeCP2, and the other expresses the mutant.

Neurons with the R294X mutation in MeCP2 are smaller than control neurons, the study found. Studies have shown that individuals with Rett syndrome have a smaller brain volume than do controls.

In the second new study, published 12 October in PLoS One, researchers derived stem cells from skin cells taken from individuals with fragile X syndrome2. They then induced these stem cells to form neurons to parse out the mechanism that inactivates FMR1, the fragile X gene.

FMR1 typically contains between 5 and 60 repeats of a three-nucleotide sequence, CGG. However, a genetic process that recognizes duplicated sequences can cause this region to expand to more than 200 copies. When the number of repeats exceeds 200, a methyl group added to the sequence silences the FMR1 gene.

Cell lines from three individuals with fragile X syndrome each have a different number of CGG repeats, the study found. The researchers show that the level of methylation of the FMR1 gene is related to both the number of repeats and the expression of the gene.

In two cases, the number of repeats decreases between the original cells and the derived neurons, the researchers found.

The results suggest that these cell lines can be used to study the process of repeat expansion. The researchers caution, however, that the FMR1 expansion in stem cell-derived neurons may not reflect the original number.