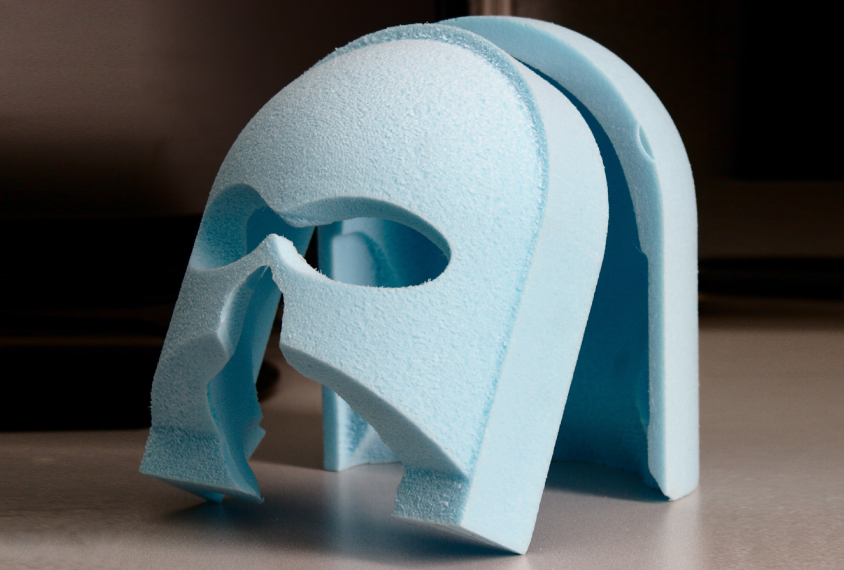 Head case: A Styrofoam mold can be made to order for each participant in imaging studies.

During a typical functional magnetic resonance imaging (fMRI) scan, researchers take multiple pictures of a person’s brain and combine them. If the person’s head moves during the scan, the images may blur and taint the results. The problem is particularly prevalent in autism research, as children with the condition are often anxious or sensitive to noise, making them liable to fidget.

Researchers often try to minimize autistic children’s movements by having the children practice in a mock scanner. They may also use foam pads to cushion the bars that surround the head area. But these strategies don’t prevent all movement.

Mask making: A 3-D image of a person’s head is the first step in crafting a frame that fits.

In the new work, researchers created a mold that comfortably keeps a person’s head motionless in a scanner.

Participants cover their hair with a swim cap while the researchers take 360-degree photos. A company called Caseforge uses the image to make a custom, two-part head mold out of Styrofoam; the front part has openings for the eyes, nose and mouth.

The researchers tested the head molds made for 13 people aged 7 to 28 years; those 17 or younger also practiced staying still in a mock scanner. Some of the youngest participants decorated their molds with MRI-safe markers.

Each person had four fMRI scans of 4.8 minutes each while they focused on a white target against a black screen. The new molds were used for two of the scans; for the other two, the researchers padded the fMRI bars with foam.

The molds decrease both side-to-side and up-and-down motion significantly more than the foam pads in 12 of the 13 participants. The molds also improved image quality in the scans across every age group. The findings appeared in January in NeuroImage.

The researchers have begun to order customizable molds for all their study participants, including those with autism; they say the molds have not bothered any autistic children so far.

Stop motion: A participant lies down into the back of the mold, and its front section is placed over her face.
References:
TAGS:   autism, brain imaging, fMRI, videos
0Comments
Join The Discussion