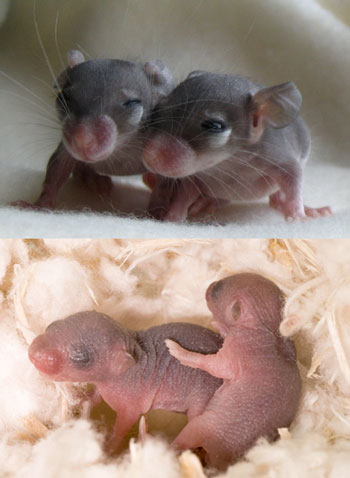 The so-called ‘spiny mouse’ has a gestational period twice as long as that of typical laboratory mice. This makes them good models for studying the link between prenatal exposure and autism risk, according to a study published 29 August in Brain, Behavior and Immunity1.

Most mice give birth to 10 to 12 pups after about 20 days of gestation and at a developmental stage that is roughly equivalent to the human early third trimester. By contrast, Acomys cahirinus, a species of spiny mouse, are born in litters of three to four pups after about 40 days of gestation. Unlike other mice, spiny mouse newborns have fur, their eyes are open and they have mature kidneys, lungs, livers and brains.

The new study takes advantage of this longer gestation to show that mild immune activity — such as that caused by a common cold — during the third trimester can lead to brain and behavior changes in the offspring.

Several studies in animal models have shown that activating a mother’s immune system during pregnancy affects her offspring. Researchers study this effect in animal models by injecting pregnant mothers or newborn mice with a compound that simulates viral infection.

However, during pregnancy, the placenta, which relays maternal immune molecules and hormones to the fetus, increases the concentration of maternal molecules. As a result, direct injection of newborn mouse pups may not fully recapitulate the effect of environmental exposure during pregnancy.

In the new study, researchers injected pregnant spiny mice with a tenth of the typical dose at day 20, their gestational halfway point. Epidemiological studies suggest that in people, the embryo is particularly vulnerable to immune activity midway through pregnancy.

At 3 and 9 weeks of age — the equivalent of pre- and post-puberty in people — the pups of injected mice are less active than those born to controls. The pups of control mice learn to balance on a rotating cylinder and continue to improve after ten-minute breaks, whereas those of the injected mice forget their experience. This may be the result of deficits in short-term memory, the researchers say.

At 1 day of age, mice born to injected mothers have less reelin in their hippocampus than do the offspring of controls. Reelin helps mature neuronal connections in the developing brain and is a candidate gene for autism. Microglia, the brain’s immune cells, also show signs of activation in the pups of injected mice. Microglial activation may indicate disrupted immune activity in the brain.