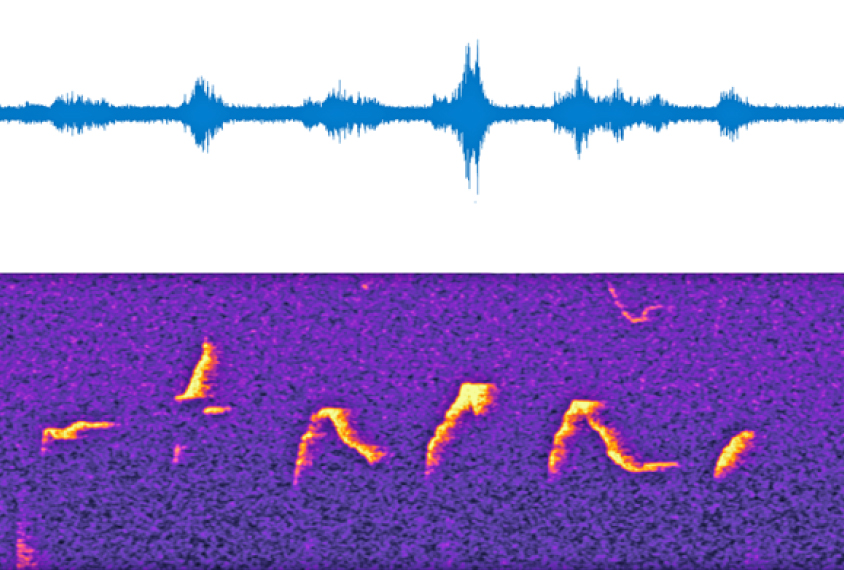 Calling out: Sound graphs (bottom) of ultrasonic mouse squeaks built from the raw audio (top) showcase the diversity of sounds the animals use to communicate.

Rodents emit a diverse array of squeaks in the ultrasonic frequency range. Autism researchers have long listened in on these complex vocalizations to try to understand how they might differ in mouse models of the condition.

However, most software programs designed to analyze the cries rely on making assumptions that could bias results, and they are prone to distortion from ambient noise.

The new program, called DeepSqueak, uses an artificial neural network to identify the basic units of sound, or ‘syllables,’ in the calls, while successfully filtering out surrounding noise.

The researchers first created sonograms, or sound graphs, from hundreds of recordings of rat and mouse vocalizations1. DeepSqueak sorted the sonograms based on features such as slope, amplitude (volume), frequency (pitch) and duration. The program used these parameters to map out the rodents’ repertoire of syllables.

The researchers tested the software on a set of sonograms after adding artificial noise. DeepSqueak ably parsed the sonograms into 20 syllables no matter how much digital noise the researchers added. By contrast, two other programs failed to detect vocalizations at all.

When the scientists added real noise, such as the rodents rattling and knocking, DeepSqueak could still detect calls with a high degree of precision, but the other programs could not. The work appeared 4 January in Neuropsychopharmacology.

The free software package comes with separate modules for mice and rats, and for short and long rat calls. Users — even those who cannot write code — can easily generate other versions to fit their needs.