Social brain may differ between men and women 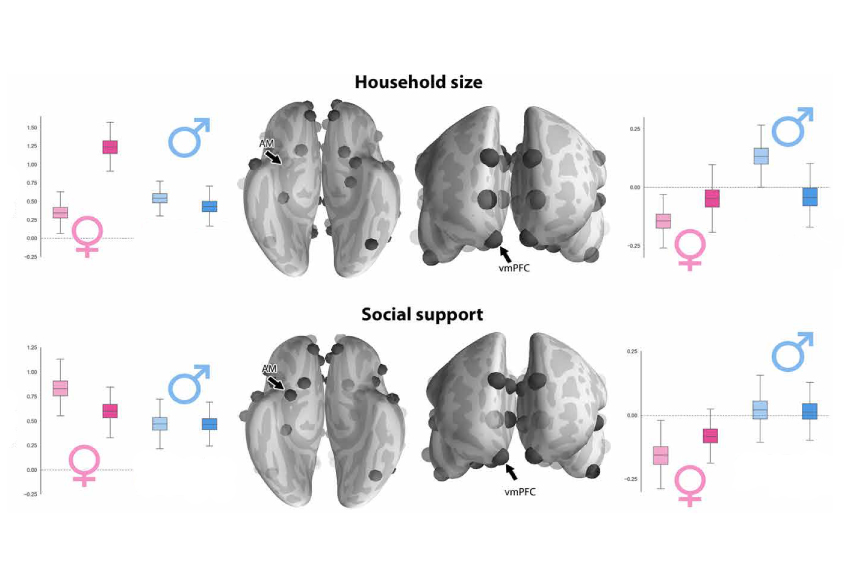 Brain structures differ in volume depending on a person’s social environment and socioeconomic status, and between men and women, according to a new analysis1. The findings could help explain differences seen in the brains of autistic women and men, many of whom find social communication challenging.

Researchers analyzed brain scans from about 10,000 people enrolled in the UK Biobank, a large-scale initiative to understand health trends in the United Kingdom. The participants were 55 years old, on average. They completed surveys, answering questions about their income level, satisfaction with friends and family, participation in social activities and feelings of loneliness.

The researchers found that associations between the survey responses and the volume of brain regions linked to social contact differ by sex. For example, women who live with two or more people have a larger amygdala — a brain region involved in decision-making and emotional responses — than do women from smaller households. By contrast, household size has little effect on the size variation of amygdalae among men. The study appeared 18 March in Science Advances.

The scans also showed that men who say they lack social support from siblings and friends tend to have a larger nucleus accumbens, part of the brain’s reward circuitry, than men who reported having more social support. The researchers did not see this difference in women. Other differences between men and women appeared in networks involving multiple brain regions, such as those involved with visual processing.