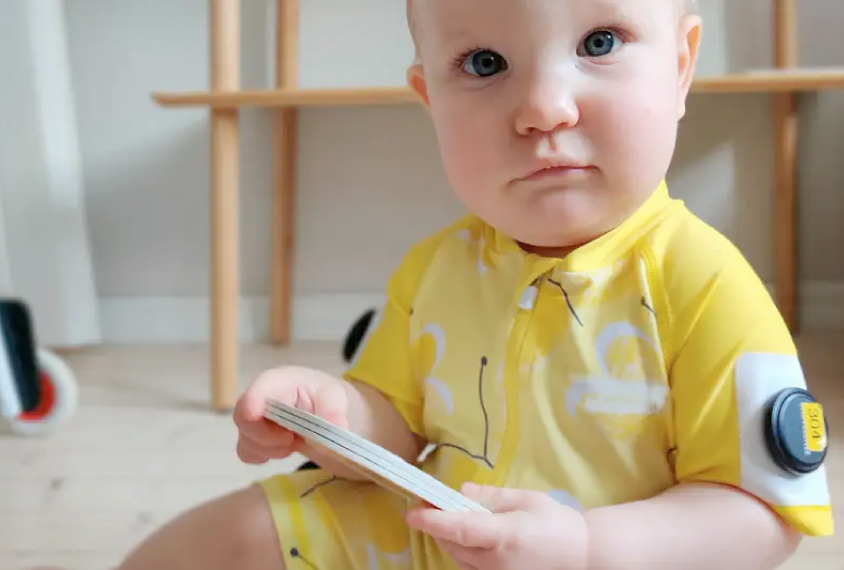 Baby monitor: Four sensors in the limbs of the ‘smart’ jumpsuit detect five postures and a variety of movements.

A new jumpsuit is fitted with sensors that can track and classify an infant’s posture and movements1. The device could be used to screen infants for movement issues stemming from conditions such as autism.

Although the presence of movement problems is not required for an autism diagnosis, up to 80 percent of autistic people experience them. Research studies and parent reports suggest that these motor difficulties appear early in life.

Clinicians typically examine infants for only a few minutes during a routine doctor’s visit and may not spot motor problems. And infants may make more natural movements in their home environments.

The new ‘smart’ jumpsuit can track infants for hours wherever they are. Similar devices are used to track activities such as walking and running in adults, but infants move differently, calling for a different design.

The infant jumpsuit is a comfortable swimsuit equipped with four battery-powered sensors attached to the upper arms and upper legs. The system recognizes five postures — a crawl pose and lying on the stomach, back, left or right sides — and a variety of movements, including several different types of crawling, rotating the body and turning over.

Researchers piloted the jumpsuit in 22 infants, all about 7 months old. They placed the infants on a foam mattress surrounded by toys. With caregivers present, the researchers prompted the infants to move through a series of movements commonly tested during a neurological exam.

The team recorded the sessions, each lasting 30 to 60 minutes. Three of the researchers independently reviewed the video to classify the infants’ postures and movements second by second.

The researchers trained a machine-learning algorithm to recognize their classifications and the information recorded by the jumpsuits; they then tested it on data withheld from the training session. The algorithm classifies the infants’ postures and movements as well as the researchers do. It can also readily distinguish the infants with the highest and lowest motor abilities.

Each jumpsuit in the pilot study cost $200, but large-scale manufacturing could lower the price to $30.

By adjusting the machine-learning protocol, researchers may be able to tailor the jumpsuit to screen for signs of autism and other conditions. They might also use the algorithm to track the effectiveness of treatments. The team is testing the jumpsuit’s ability to detect motor delays in children who experienced a lack of oxygen during or immediately after birth.