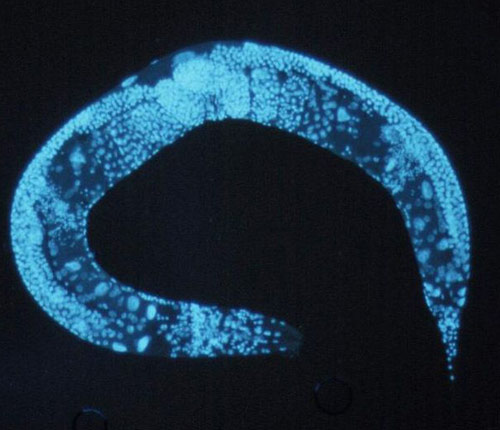 Slippery subject: The worm Caenorhabditis elegans has a small and fully mapped brain, making it a good model for studying human neurological disorders.

The nematode Caenorhabditis elegans may serve as a useful model to study synapses, the junctions between neurons, according to a study published 18 June in PLoS One1.

In particular, human and worm neuroligins (NLGNs) — autism-linked proteins that bridge and organize synapses — are similar enough that one can substitute for the other, the study found.

C. elegans has an extremely simple brain and nervous system, which has allowed researchers to map connections between each of its 302 neurons. The worms have a single neuroligin, NLG1, whereas humans have four versions (NLGN 1-4) with an extra copy of NLGN4 on the Y chromosome.

Studies have associated a mutation in NLGN3, R451C, and another in NLGN4, D396X, with autism. Mice lacking NLGN1 groom themselves obsessively, reminiscent of the repetitive behaviors seen in autism.

In the new study, researchers engineered worms lacking NLG1. Control worms are able to detect and avoid high concentrations of salt or sugar in their environment, swimming away from a 4 molar sugar solution added to their enclosure2. Only about a quarter of worms lacking NLG1 show the same response, the study found, suggesting defects in sensory perception.

Worms also typically change which direction they’re moving in when gently poked with an eyelash, a behavior that allows them to swim away when they encounter an obstacle. The mutant worms are only half as likely to respond to the eyelash as the controls are, the study found.

Both these behaviors recover to nearly normal levels when researchers add back human, rat or worm NLGN1, suggesting that each version functions equivalently to the other.

The researchers also engineered human NLGN1 with a mutation at a conserved amino acid equivalent to R451C and one at D396X, to mimic the autism-linked mutations in NLGN3 and NLGN4. These mutants only partially recover detection of sugar concentrations and have no effect on the worms’ response to touch.

The results suggest that C. elegans could be a simple model to map the effects of autism-associated mutations in neuroligins and other synaptic proteins on the brain, the researchers say.