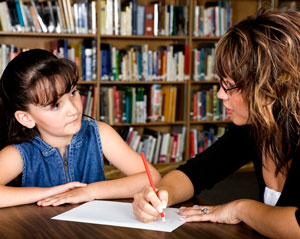 Twenty questions: Combining diagnostic questionnaires based on both parent and teacher reports is more accurate than using either form alone.

A subset of questions on two behavioral screens can distinguish children with autism from those with other developmental disorders, according to a study published 23 August in Autism1.

Because behavioral therapy is believed to be the best known treatment for autism, researchers are aiming to develop tests that can diagnose autism as quickly and early in life as possible.

The new checklist can be used to identify children who need further evaluation, the researchers say, and can be incorporated into early-childhood health programs.

The study takes advantage of the Netherlands’ Preventative Child Health Care program, which screens about 95 percent of the general population for behavioral and health problems. The screen includes the Child Behavior Checklist (CBC), which is a caregiver questionnaire, and the Teacher’s Report Form (TRF), a version adapted for teachers.

Assessing half of these individuals, the researchers identified ten items each from the CBC and the TRF that are more likely to flag children in the autism group than those with the other disorders.

Children can score from zero to two on each item — such as “acts too young for his or her age,” and “strange behavior” — with higher scores indicating a higher likelihood of having autism.

The researchers then used the 20 items to predict autism in the other half of the sample. Using both the CBC and the TRF is more accurate than using either form alone, the study found.

When comparing with children who have other behavioral problems, the threshold needs to be higher, the researchers found.