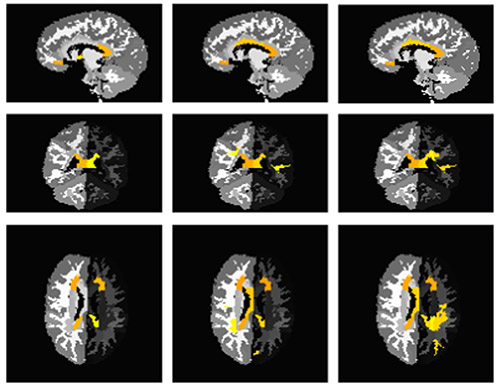 Clearer contrast: Differences between the brains of people with autism and those of controls become more apparent as autism severity in the sample increases (from left to right).

A new method for measuring severity in disorders such as autism can help researchers correct for the widely varying autism symptoms among study participants, according to a paper published 2 May in NeuroImage1.

The method, called population characterization of heterogeneity (PUNCH), lets scientists combine the results of multiple tests into a single severity score for each individual. Using severity scores, they can divide their samples in new ways, allowing them to detect subgroup characteristics that might otherwise remain hidden.

Researchers first created PUNCH as part of a larger project to understand differences in brain images between people with autism and controls. They hoped to find new ways to parse their sample, the better to reveal differences between the groups.

People with autism have widely varying intelligence quotients, language abilities and levels of repetitive behavior and social difficulties, among other core autism symptoms. This can make it difficult to home in on the exact differences between people with autism and controls.

For PUNCH’s proof of concept, the researchers analyzed unpublished test results collected in the broader research program. They used results from nine tests measuring 50 traits, including social responsiveness, communication, attention and anxiety, in 370 adolescent males with autism and 118 controls. They converted the scores into percentiles of performance in comparison with that of others.

The researchers then calculated how well the scores for each trait distinguish between people with autism and controls,and weighted them accordingly to produce an overall score.A person who has more traits that distinguish well between autism and typical development gets a higher overall severity score than a person with traits that are less distinctive.

The researchers say that using the new severity metric as a filter for their analyses will allow them to see trends that might otherwise be obscured by mild cases of the disorder. They are applying PUNCH to a much larger collection of brain images.