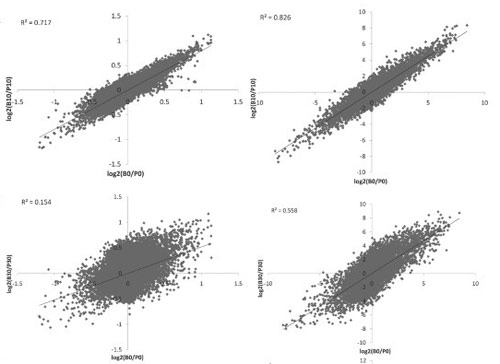 A technique for measuring  gene expression that detects short RNA messages is better suited than traditional methods for analyzing postmortem brain tissue, according to a study published 10 September in BMC Genomics1.

Studies on gene expression typically look at levels of messenger RNA, or mRNA, the messages that code for protein.

In the new study, researchers compared two methods of RNA sequencing: in vitro translation (IVT) and cDNA-mediated annealing, selection and ligation, or DASL. Researchers have used DASL to investigate gene expression in tissues from biopsies and autopsies, but this is its first use with postmortem brains.

Unlike IVT, DASL generates DNA copies of mRNA messages, called cDNA, and matches them with overlapping probes as small as 50 bases. The relatively small size of these probes makes this technique ideal for sequencing short, or damaged, RNA fragments.

In the new study, researchers first simulated the degraded RNA found in postmortem brains by exposing RNA to high temperatures for 10, 30 and 60 minutes. They then compared the gene expression results from these samples to a reference RNA sequence.

The researchers then compared the accuracy and sensitivity of the two methods using 57 frozen postmortem brain samples and 4 chemically preserved brains. DASL sequencing is more sensitive and detects more genes than the IVT method does in frozen brain samples, the study found.

Both techniques have poor results with fixed brain tissue, however. A March 2011 study shows that researchers can extract high-quality DNA from frozen, but not fixed, postmortem brains2.