Robots could fill in for autism therapists 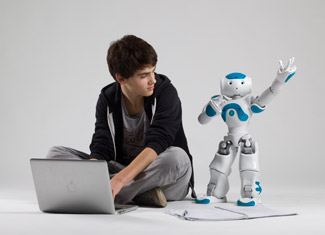 Follow my lead: A commercially available robot can teach children with autism to look where it’s pointing.

Robots may be able to help treat children with autism when qualified therapists aren’t available, according to a study published 3 December in IEEE Translational Neural Systems Rehabilitation Engingeering1.

The researchers designed a setup that allows a human-like robot to interact with children without ongoing input from trained professionals.

There are several available robots designed for children with autism. In the past few years, companies have developed robots ranging from a brontosaurus that needs encouragement to cross a cartoon river to a disembodied female head that models human emotions. Children with autism who respond eagerly to the robots improve in their social behavior after engaging with them.

In the new study, researchers designed a setup in which NAO, a two-foot high commercially available robot capable of fluid human-like movements, interacts with children who have autism. The robot teaches the children joint attention skills, the ability to follow others’ prompts. Studies suggest that learning this skill at a young age can improve the long-term outcome for people with the disorder.

For the intervention, a child with autism sits in a room with NAO. The room has two cameras and the child wears an infrared sensor attached to a baseball cap. Together, the cameras and sensor detect where the child is looking, and can relay the information to the robot, which responds accordingly.

When the child does look in the right direction, the robot tells him he did a good job and the monitor plays a short video clip from a children’s show such as ‘Bob the Builder.’

The researchers assessed this with six children who have autism and six controls, all ranging in age from 2 to 5 years. Each child sat through four sessions lasting two to four minutes, half with a therapist and half with the robot.

Both groups of children needed fewer prompts to look at the monitor with the therapist than with the robot. This may be because the robot is novel and interesting to them. This difference may fade away over time, improving the robot’s effectiveness, the researchers say.