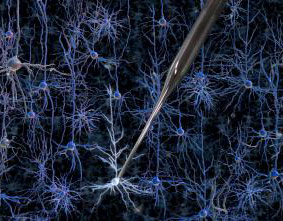 Sputnik Animation, McGovern Institute Clear results: A glass pipette carefully placed next to the cell wall of a neuron can record the strength of its signals.

A robot can replace researchers in performing a painstaking technique that records neuronal signals in live animal brains, according to a study published 6 May in Nature Methods1.

In 1991, Erwin Neher and Bert Sakmann received the Nobel Prize for a technique dubbed patch clamping, in which scientists record the activity of a neuron using a miniature glass pipette. Researchers carefully insert the pipette adjacent to a cell wall, covering one of many channels that release ions when neurons fire. A cable inserted into the pipette records these electrical changes.

The technique revolutionized neurobiology, but is extremely difficult to perform in the brains of live, anesthetized animals, and takes scientists months to master.

In the new study, researchers engineered a robotic arm controlled by an algorithm designed to search and find neurons in the mouse brain.

First, the arm moves the glass pipette carefully into the brain up to a set distance, positioned near the neurons of interest. Next, the arm carefully advances the pipette two micrometers at a time, sampling electrical currents ten times per second. When the robot detects a neuron through a change in electrical current, it stops immediately. It then creates suction to form a seal with the cell wall, and sends a zap through the tube to open up a passage into the cell.

Using the arm, researchers were able to seek and successfully record signals from neurons approximately 33 percent of the time, equivalent to the success rate for a skilled researcher.

They plan to use the robot to sample from multiple neurons simultaneously; for example, neurons in distant regions of the brain. Some studies have suggested that deficits in long-range brain connections underlie autism.

The researchers can also modify the robot to perform other tasks. For example, it could inject neurons with dyes that outline their shape, extract genetic information to provide a picture of gene expression, or it could be trained to detect specific subsets of cells.