Researchers trace wiring in the brain 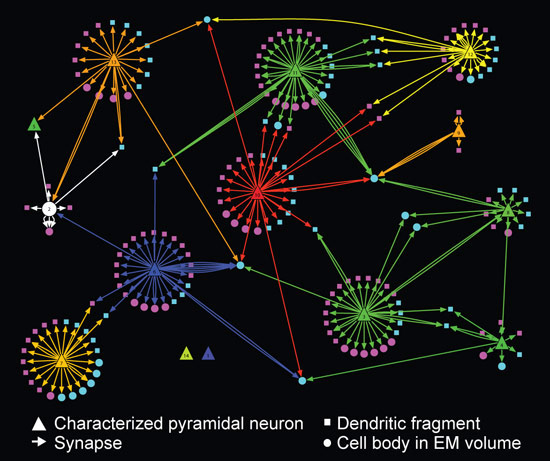 Linked lines: Neurons that can both activate (purple) and inhibit (blue) signals in the brain interact with each other in complex circuits.

Researchers have mapped the architecture of a brain circuit active during vision in the cerebral cortex — a region involved in memory and planning — according to a study published 10 March in Nature.

The new technique will allow researchers to resolve questions such as whether neurons that calm signals in the brain are non-specifically activated by surrounding cells.

Each neuron can form up to a thousand junctions with others, each of which can branch out to thousands of other cells, creating staggeringly complex circuits with tens of millions of connections. Some studies have traced the connections between a few individual neurons, but it is these large, complex circuits that are the key to brain function.

In the new study, researchers used a dye that lights up when neurons fire to label cells in the cerebral cortex that are active as mice watch a film. They then removed this region from the brains of those animals and photographed a large section containing more than 1,000 cells.

Over several months, they took thousands of images of each of 1,215 sections sliced from this region and stitched them together into large three-dimensional representations using an electron microscope — a highly magnifying microscope that can trace the outlines of each neuron.

From these reconstructions, the team followed 10 individual neurons that were active in the initial experiment and traced 245 of their connections. They also indicated whether the function of the neurons is to turn on signaling — that is, whether they form excitatory synapses — or to inhibit it.

A disruption in the balance between excitatory and inhibitory signals is believed to be one cause of autism, and is known to lead to epilepsy. There is some disagreement in the field as to whether inhibitory neurons are tuned to certain signals or are activated non-specifically.