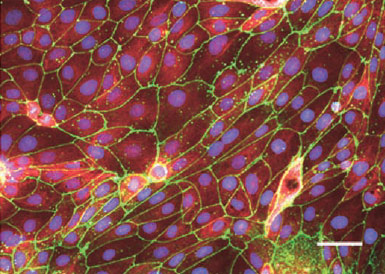 Gatekeepers: Inducing stem cells to replicate the blood-brain barrier allows researchers to test whether a candidate drug can enter the brain.

Using a two-step process to reprogram human stem cells, researchers have recreated the barrier that protects the brain from toxic molecules, according to a study published 24 June in Nature Biotechnology1.

Drug candidates for neurological disorders are often tested in cell culture, but in order to be effective in people, they must get through the blood-brain barrier and enter the brain.

Even drugs delivered intranasally need to travel through blood vessels to reach the brain. For example, for a small amount of oxytocin, a potential autism treatment, to enter the brain, an individual would need to sniff a teaspoonful.

The new system allows researchers to test whether, and how well, candidate drugs cross the blood-brain barrier.

The blood-brain barrier is maintained by specialized cells called brain microvascular endothelial cells (BMECs), which line blood vessels entering the brain. These cells form tight junctions with each other, preventing molecules from diffusing between them. To enter the brain, molecules instead must actively be transported through BMECs.

Some teams have created models of the blood-brain barrier by using cow, pig, rat or mouse cells, but the barriers are species-specific, limiting their usefulness. It is also possible to culture BMECs extracted from postmortem brains or biopsy tissue, but these resources are rare. Immortalizing these cells so that they divide continuously affects the barrier, producing cells that do not form tight junctions.

In the new study, researchers created human induced pluripotent stem cells and coaxed them to become neurons. They then exposed the resulting mix of neural progenitor cells, immature neurons and mature neurons to growth factors that promote the formation of endothelial cells. This combination of neuronal and endothelial factors produces BMECs.

The researchers purified the BMECs that formed to create a population that has the same properties as the blood-brain barrier, including tight junctions.

In addition to screening compounds, the cells can be used to study the blood-brain barrier, which goes awry in disorders such as Alzheimer’s disease and multiple sclerosis, the researchers say.