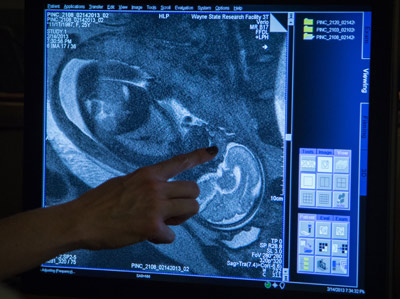 Pregnant peek: An imaging machine that accommodates a pregnant woman can scan the brain of a 31-week-old fetus.

Researchers can use functional magnetic resonance imaging (fMRI) to map fetal brain connectivity during the second and third trimesters of pregnancy, according to a study published 20 February in Science Translational Medicine1.

The research team used this technique to show that connections in the brain strengthen during gestation. A map of typical development may allow researchers to identify alterations in the fetal brains of those who go on to develop neurological disorders, such as autism.

Autism is typically diagnosed at around 3 years of age, after behavioral symptoms become apparent. But the trajectory of brain development is likely to go off course much earlier, perhaps even during gestation, researchers say.

Studies suggest that children with autism may have atypical brain connectivity, although the exact nature of these differences is still under debate. Altered connectivity during development may be an early biomarker indicating a risk of developing autism, the researchers say.

In the new study, researchers scanned 25 women between 24 and 38 weeks of pregnancy in an fMRI machine. The scans detected brain activity in the fetus, which the researchers used to estimate the strength of connections between the two sides of the brain.

Only 20 of the 42 brain regions tested are significantly connected. All of these regions are highly connected in adult brains, suggesting that the remaining links form as the fetus develops.

Also, the older fetuses in the study show stronger connections in many brain areas than younger ones do. Overall, the results show that brain connectivity is a dynamic process that begins during gestation, the researchers say.

One caveat of the study is that fetuses can move around. Studies have shown that head motion in a typical fMRI scanner can lead to misleading estimates of connectivity. The researchers used error correction to account for movement, but they say that this could be improved.