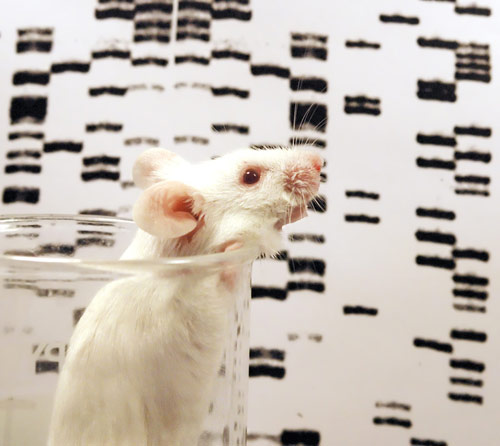 Researchers have sequenced 17 laboratory mice and mapped 56.7 million single-base DNA variants in their genomes, according to a study published 15 September in Nature1. A companion paper in the same issue identifies more than 700,000 structural variants, which are insertions, deletions or other modifications of DNA2.

The results could allow scientists to identify strains of mice that carry DNA variants associated with diseases such as autism, the authors suggest.

Researchers often engineer mutations in mice that mimic those in people in order to hone in on the effects of these genes on the brain and behavior. Several resources already exist to aid this process, including a project to delete each of the genes in the mouse genome — which has thus far created nearly 17,000 mouse embryonic stem cell lines — and another to enhance the amount of natural DNA variation among laboratory strains of mice.

In the new study, researchers sequenced the entire genome of 13 strains of mice typically studied in the laboratory and 4 strains bred from wild populations. The researchers identified 56.7 million variants that alter a single base pair, called single nucleotide polymorphisms, or SNPs, among these mice.

Of these, approximately 100,000 SNPs affect genes that code for protein. Another study published in 2007 identified 8.3 million SNPs among 13 strains3.

In the companion study, the researchers identified 711,920 structural variants at 281,243 sites in the genome. Of these, 98 percent are insertions or deletions of regions of the chromosome, also called copy number variations.

The researchers identified only 24 structural variants that disrupt regions of DNA that code for protein, suggesting that they do not play an important role in the genetic diversity of mice.