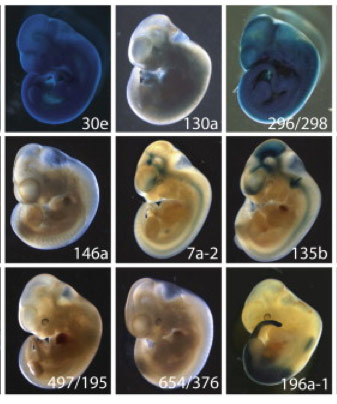 Indigo tracker: Replacing small regulatory molecules called microRNAs with a blue protein shows that some of them (middle row) are expressed in the central nervous system during development.

Researchers are developing a resource that will allow scientists to engineer mice lacking one of 162 microRNAs — non-coding regions of the genome that regulate gene expression. The results were published 19 April in Cell Reports1.

Several collaborative projects, such as the International Knockout Mouse Consortium, are working to engineer a ‘knockout’ mouse for each one of the genes in the mouse genome. But these ventures are focused solely on the regions of the genome that code directly for proteins.

The remaining 98 percent of the genome is long past being considered ‘junk DNA,’ or of little to no importance, however. One type of non-coding DNA in particular is transcribed into fragments of RNA, dubbed microRNAs, which in turn regulate gene expression when genetic messages are translated into protein.

MicroRNAs appear to play a role in neurodevelopmental disorders. Studies have shown that the levels of some microRNAs are altered compared with controls in postmortem brains from individuals with schizophrenia or autism. And a study published last summer shows that one microRNA, miR-125a, fine-tunes the levels of autism-associated proteins that function at synapses, the junctions between neurons.

Last month, researchers reported the first genetic association between a mutation in a different type of noncoding RNA and autism.

In the new study, researchers have developed 162 constructs that will allow them to toggle the expression of microRNAs on and off in specific brain tissues and at specific stages in development.

They have created stem cell lines, the first step towards engineering knockout mice, from 64 of these constructs and developed 46 mouse strains that carry the construct in their genome. Mating these mice to other mice that carry the gene for an enzyme called CRE results in a knockout of the targeted region.

The researchers used this technique to engineer mice that are completely lacking the coding region for one of each of 11 microRNAs. Only one of these mutations is lethal, suggesting that the majority of microRNAs may not be essential.

They also knocked out 18 microRNAs in mice while simultaneously expressing a blue protein in their place, which allows them to determine where and when the microRNAs are normally expressed.

Of these mice, six express the blue protein in all cells in their body, whereas the other 12 microRNAs are expressed in certain cells or at certain stages of development. For example, four microRNAs — miR-7a-2, miR-135b, miR-325 and miR-688 — are expressed specifically in brain tissue and in the central nervous system.

The resource will provide researchers with a tool with which to investigate the effects of mutations that inactivate microRNAs on mouse behavior, and will help clarify the link between non-coding regions of the genome and neurodevelopmental disorders.