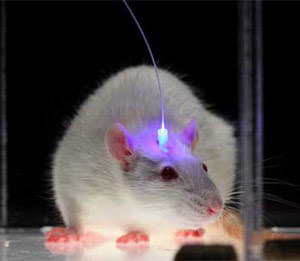 Researchers have engineered four new mouse lines that each show activation of a different subset of neurons in response to a blue light, according to a study published in the September issue of Nature Genetics1.

These mouse lines have stably inserted genes that code for light-sensitive proteins, eliminating the need for injecting the genes, a difficult and expensive experimental step.

A 2005 study first showed that when bacterial genes called opsins are inserted into neurons, beams of light can either activate or repress the cells2. Several studies have since adapted this technique to mouse models. Researchers can inject DNA that codes for opsins into mouse brains and then control neuronal activity using a fiber-optic probe.

In an August study, researchers injected channelrhodopsin, a type of opsin that activates neurons, into mouse brains and showed that shifting the signaling balance in the brain towards activation leads to social deficits. This result supports the theory that autism is caused by an imbalance between inhibition and excitation in the brain.

The new study refines the technique by eliminating the need for injections. Injections are not always successful, and can lead to inconsistent levels of the gene in the targeted neurons, the researchers say.

To resolve these issues, the researchers integrated the gene for channelrhodopsin into four mouse lines. The gene is inserted next to regulatory regions that are only active in one of four subtypes of neurons, restricting its expression to those subtypes.

The resulting four mouse lines are each primed for experiments in different families of neurons: those that make gamma-aminobutyric acid, or GABA — which inhibits signals in the brain — serotonin, acetylcholine or parvalbumin, a signaling molecule expressed by a subset of GABA neurons.

Researchers can use the lines to examine the effect of signaling activity in each of these subtypes on mouse behavior. The Jackson Laboratory in Bar Harbor, Maine,is developing the strains for distribution.