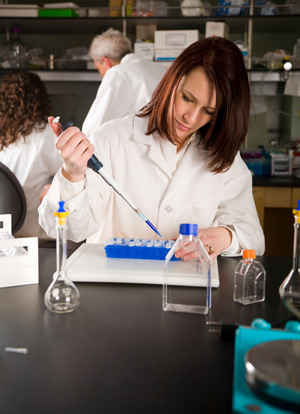 Genetic testing: Tests for Rett syndrome need to detect the hundreds of different mutations seen in MeCP2 in people with the syndrome.

Researchers have established a set of commercially available cell lines that can help gauge the quality of tests for Rett syndrome, they reported in the March issue of the Journal of Molecular Diagnostics1.

Rett syndrome is an autism-related disorder characterized by a sudden loss of language and motor skills around 1 year of age. In most cases, it is caused by mutations in the MeCP2 gene. Despite this clear genetic cause, there is no federally approved genetic test for Rett. Each clinical laboratory uses its own homegrown assay.

Any comprehensive Rett test must be able to detect the myriad MeCP2 mutations found in people with the syndrome. About 60 percent of Rett cases can be traced back to eight mutations that each change a single DNA base in the gene. Overall, however, there are hundreds of MeCP2 mutations that can cause Rett.

To test the reliability of a genetic test for Rett, laboratories need reference strains with known MeCP2 mutations. Few of these strains have been commercially available, so the researchers generated 34 reference cell lines, available from the NIGMS Human Genetic Cell Repository.

The 34 cell lines include the eight common mutations, as well as duplications and deletions within the gene, mutations that shift the genetic code and ones that alter correct splicing of the gene into protein.