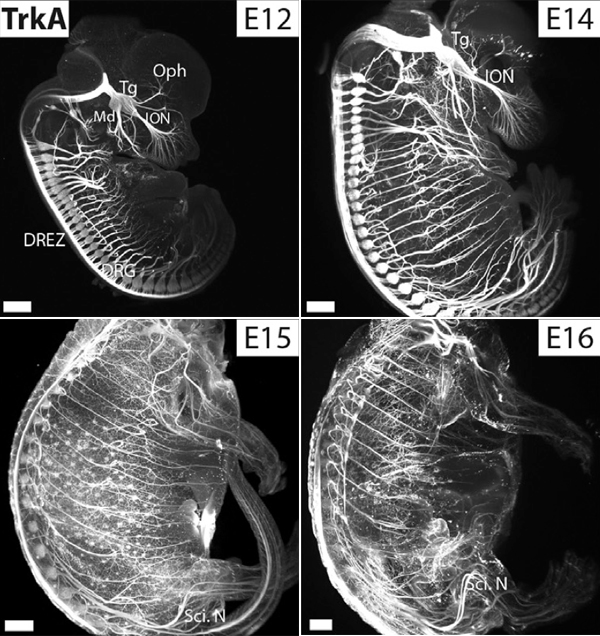 Lit-up nerves: Pain-sensing neurons in mouse embryos ranging from 12 to 16 days old are illuminated using an antibody for the receptor TRKA.

A new method called iDISCO makes tissue more transparent and permeable to antibodies. The method, reported 30 October in Cell, may give scientists a deeper view into the brain and other organs1.

Traditional methods for labeling proteins with antibodies require thin slices of tissue. This makes it difficult to study three-dimensional structures such as winding tracts of nerve fibers.

Some new techniques allow scientists to see inside solid tissues by making them more transparent. But these methods, such as CLARITY, CUBIC and Scale, are time-consuming and are primarily intended to pick up fluorescent proteins in genetically engineered animals. They are less ideal for highlighting proteins labeled with commercially available antibodies, as the methods interfere with some proteins’ shapes and may prevent antibodies from binding them.

iDISCO solves these problems. It preserves the structure of proteins by marrying an established method for making tissues transparent, called 3DISCO2, with treatments that allow antibodies to penetrate deep into tissues and label proteins.

The researchers used iDISCO to illuminate a range of proteins in mouse brains, embryos and other tissues using 28 antibodies. For example, labeling various cell surface proteins allowed the researchers to generate images of axons, the long projections of neurons, in fine detail. They also labeled markers of neuronal death to visualize how connections are pruned during mouse development.

Using iDISCO to make tissues transparent takes a day, and the entire process of preparing tissues for imaging takes between 8 and 18 days, depending on the size of the sample. Other methods can take weeks to months to complete.

A shortcoming of iDISCO compared with other methods is that it quickly quenches the fluorescence of engineered proteins. However, researchers wishing to look at those proteins can still label them with antibodies once their fluorescence has faded.