Rats armed to catch up to mice as top mammalian model 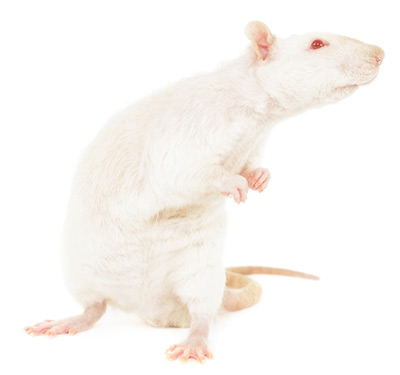 Social skills: Rats may be better models for autism than mice because they have complex social behaviors.

Researchers have developed a method to engineer rats so that they lack a certain gene in some regions of the brain and not others, they report in the July issue of Nature Methods1.

In many ways, rats are a much better choice for modeling autism than mice are: Their brains are bigger and better understood anatomically than those of mice, and they have complex social behaviors, such as play. Studies have also shown that rats have the ability to recognize human language and show signs of empathy.

At the 2011 Society for Neuroscience Annual Meeting in Washington, D.C., researchers announced that they had engineered seven new rats, each lacking an autism-related gene.

Mice remain the model of choice for most autism researchers, however, because they are easy to manipulate genetically. There is probably a commercially available mouse mutant for any given gene of interest. What’s more, some mouse strains allow researchers to switch genes on at certain times in development or in certain cell types.

In the new study, researchers engineered rats that offer the same genetic control. The method, called CRE recombination, uses the rat’s own regulatory regions to control expression of the CRE enzyme. When CRE is active, it chops out regions of DNA placed between two tags, called LoxP sites. This allows researchers to remove genes from certain cell types and home in on the gene’s function.

To genetically manipulate the rats, the researchers inserted pieces of DNA into fertilized eggs. They equipped the DNA with sticky sites, called zinc finger nucleases, that can insert the DNA into certain places in the genome.

The researchers used this method to add a LoxP site to each side of the GRIN1 gene, which codes for a protein that regulates the activation of brain signals. They then engineered another set of rats that express CRE in neurons that produce the chemical messengers dopamine, norepinephrine and epinephrine. Among many other roles, these messengers regulate sensations of reward.

The researchers then bred these two sets of rats, ending up with some rats that have both the LoxP-tagged GRIN1 gene and CRE. These rats lack one copy of GRIN1 in only the subset of neurons expressing CRE. Because GRIN1 is essential, none of the surviving rats lack both copies of the gene.

The results show that complex genetic manipulation is possible in the rat, opening up a wealth of possibilities, the researchers say. The same techniques may also be possible in other species.