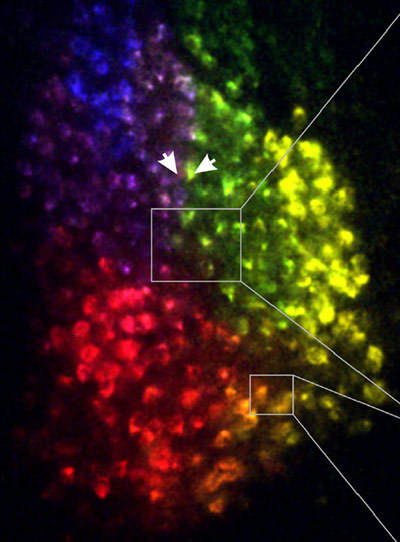 Colorful cells: Neurons in a mouse brain contain tiny dye-filled bubbles that vary in color depending on the paths the cells take.

A new technique lets researchers trace the paths of many neurons at once using dyes of varying hues. The method, described 27 April in Nature Methods, may reveal how neurons go astray in autism1.

Mapping connections in brain tissue is a laborious process that requires the marking of axons, the long conduits that transmit neuronal signals, one at a time. In one technique, researchers inject neurons with a fluorescent dye, which then diffuses through the branches of each axon.

In another, they engineer mice so that the mouse neurons make fluorescent protein. They then stitch together stacks of digital images, each of which depicts just a tiny portion of an axon to reconstruct the fiber’s route through the tissue. They repeat the procedure for additional axons.

The new method takes advantage of microscopic bubbles called vesicles that migrate from the tips of an axon, where the vesicles release signaling molecules, back to the main body of the cell, which recycles them. Several decades ago, researchers realized they could hijack these bubbles to transport a fluorescent dye along an axon.

Using dyes of different colors and high-resolution microscopy, researchers have now shown they can discern the destinations of dozens of axons at once.

In this method, the researchers inject three or more dyes of different colors into a section of brain or other tissue. Vesicles in the dyed area pick up the pigment and transport it to their cell bodies. A confocal microscope illuminates the color combinations and intensities in each arriving vesicle. Those colors signify the ending point of each axonal branch.

The researchers have used the technique in mice to trace nerves that are part of the circuit connecting the brainstem to a salivary gland. They injected red, blue and green dyes into different sections of the gland. Axons in the gland took up the dyes, which then made their way to the main body of each cell. From the colors and intensities of the vesicles, the researchers could tell precisely where each nerve fiber led.

The technique also works in the mouse brain, where axons extend over longer distances. Injecting dyes into the barrel cortex — a region involved in processing signals from the whiskers — highlights axons that bridge the barrel cortex and the thalamus, a region that relays sensory information.

Some studies have revealed abnormalities in neuronal connections in autism, such as too little pruning of unneeded axons. By efficiently illuminating the brain’s cellular microstructure, the new method may reveal how that structure differs in the disorder.