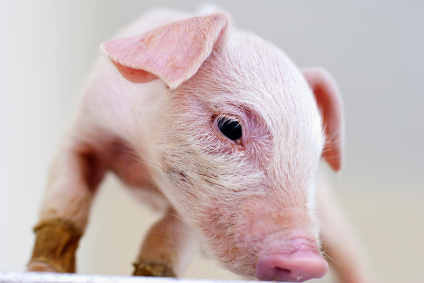 Animal farm: Pigs who have anemia never learn the location of a milk reward in a simple maze.

The brains of newborn pigs are similar in shape and mature at the same rate as those of human infants. That makes piglets a good model for studying neurological disorders, according to a study published in the November issue of The Journal of Nutrition1.

The researchers used newborn pigs to show that those with severely low iron levels in the first month of life have learning and memory deficits.

Mice are easy to work with and to manipulate genetically, making them staple laboratory models. However, establishing mouse correlates of human behavior is less than straightforward. For example, mouse brains continue to develop after birth, making it difficult to model the effects of pregnancy on brain development.

Pigs and people, in contrast, go through similar stages of brain development. They are both born with about 25 percent of their final brain weight (rats are born with 12 percent) and their brains grow rapidly over the following three months.

Like human brains, pig brains have folds, or gyri, and a similar proportion of neurons and their projections, and support cells called glia2.

In the new study, researchers used piglets to look at the effect of iron deficiency during a critical period of brain development immediately after birth. Like humans, pigs are born with limited stores of iron and so are dependent on levels of the nutrient in their diet.

The researchers put 19-day-old pigletsin a T-shaped maze ten times a day for six days, with a milk reward in the same place each time. Pigs fed a typical diet quickly learned where to find the milk and went right to it (almost) every time, but those fed low-iron meals never caught on. Piglets with a moderate iron deficiency learned where to look for the milk, but not as well as the controls.

The researchers then switched the milk’s location to see how quickly the pigs could adjust their expectations. After the first day, pigs fed a typical diet began looking for the milk in the correct place. Pigs fed moderate iron levels and those with severely low iron were both less likely to switch their strategy.

The study illustrates pigs’ performance in complex cognitive tasks even at a young age. And piglets both play and fight with their peers, providing opportunities to assess social behavior2. Pigs also have similar metabolisms to those of people.

Researchers are engineering pigs that model Prader-Willi syndrome, an autism-related disorder that leads to severe obesity.