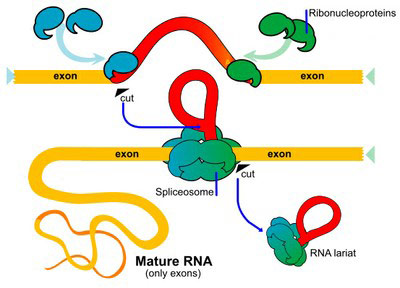 Jigsaw puzzle: Genetic variants can disrupt a regulatory process that removes some stretches of the genetic message that codes for protein.

Researchers have developed a tool that can predict whether DNA mutations are likely to alter RNA splicing, a process that modifies the sequence of mRNA, the genetic message that codes for protein. The results were published 10 February in Bioinformatics, and the tool is freely available online1.

One approach to parsing out the genetic risk factors for autism is to associate point mutations — changes to single DNA base pairs — with the risk of developing the disorder. These mutations, also known as single nucleotide polymorphisms, or SNPs, are not always harmful, but are likely to be if they disrupt genes and alter the composition and structure of the corresponding protein.

Protein structure is also influenced by RNA splicing, a normal cellular process in which pieces of mRNA, called introns, are removed and the remainder, dubbed exons, are spliced back together. This process is regulated by proteins that bind near splice sites, which sit at the boundaries between introns and exons. When mutations affect RNA splicing, the corresponding protein can be altered.

In a study published last summer, researchers looked at more than 4,000 six-base-pair stretches of DNA, dubbed hexamers, in 300-base-pair regions around splice sites in the human genome2. They chose hexamers because the regulatory proteins that bind to splice sites are most likely to bind to them, the researchers say.

The researchers then determined where specific hexamers are most likely to occur, and created a map showing the likelihood that a given hexamer would be present a certain distance away from a splice site. Hexamers that frequently cluster in a specific location are highly likely to regulate splicing when at that site, the study found.

The researchers then developed a measure to determine whether a point mutation is likely to alter the predicted location of one of these hexamers. Mutations that shift the predicted location are more likely to disrupt splicing than those that do not, the study found. This is true for mutations already known to affect splicing, the study also found. Using shifts in the location of the hexamers to predict their impact on splicing suggests that 22 percent of known disease-causing mutations may affect splicing.

In the new study, the same researchers used these results to construct an online tool that can predict whether a point mutation is likely to have an effect on RNA splicing in the human, chimpanzee, rhesus monkey, mouse, rat, dog, cat, chicken, guinea pig, frog and zebrafish genomes.

Researchers can use the tool to identify potentially harmful effects of gene variants. As genetic testing for autism becomes more common, accurately determining the impact of mutations is crucial because variants, even in autism-associated genes, may not necessarily have harmful effects.